See this guy? This guy is Jose Simian, Mediaite’s “Meet The Prensa” columnist. He’s also the person responsible for giving me a minor heart attack last weekend. Why? Jose is Chilean, and has been in Chile right with his wife and young son for the past several weeks. Including through last week’s devastating earthquake.

He is okay, thank God. But it took over a day to find that out — a day of silence on his Facebook page.

During that time, I started to panic. His Gchat “dot” — the signifier of whether someone is online, usually some variation of green, red or orange if they are — was an unrelenting gray. His Twitter hadn’t been touched for over a week. Meanwhile, on Facebook, worried posts from friends in English and Spanish were mounting. Jose is a web-savvy guy, and it seemed the most obvious question in the world to me: If he was okay, wouldn’t he let the world know?

It seems a rather dorky question right now — as it turns out, Jose was more focused on driving 17 hours through earthquake-ravaged Chile to reunite with his family. But once I knew he was safe and sound (via a response to one of my frantic emails, followed by — yes — updating that Facebook page), I started to wonder about the new ways in which we keep tabs on those who are dear to us. 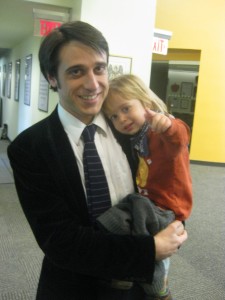 When I go a stretch without tweeting, I will occasionally get an email from my mom, checking in. I always find this amusing, but also gratifying: Thanks to Twitter, I can keep in touch with my parents and let them in on what I’m doing in a way that even the regular phone calls of a doting daughter can’t do. (One of the funniest emails I’ve ever received was a notification from Facebook informing me that my dad wanted to be my friend.) This is just when things are fine, mind you; I can’t imagine not leaping for my Blackberry in the middle of a disaster to let people know I was all right. By “people” I mean anyone you need to know such things — Facebook and Twitter and other such online markers are by far the most efficient ways of disseminating such information. It’s not the most personal — only the most wired (and heartless) digiphile would let their mom know they were okay via a Tweet before an email or phone call! — but it’s the opposite of impersonal, too. Our Facebook and Twitter pages, websites and Flickrs, Gchat status and FourSquare checkins — wherever it is we live online — are extensions of who we are, and representations of same in the digital space. We form relationships there that may be entirely different than those we enjoy “IRL” (In Real Life), but they are real even so. For those who spend big chunks of their lives online, who they relate to the most may well be a factor of who happens to be on Gchat; one of my best friends, God bless her, has a habit of calling me from her car at 5:30 pm as she drives home from work in Toronto. We connect that way once ever five calls, because I remember to turn on my phone the way she tweets (which is to say, rarely). She’s one of the people I’d call to tell I was fine if something happened, but she’d also know to be worried — really worried — if suddenly, my online presence went dark.

There is precedent for this, of course. I was in New York for 9/11 and remember the flood of emails coming in, and the constant busy signals on cellphones, too. Philip Bump documented the online reaction that day on the anniversary last year, recalling how people turned to the net for answers. Here’s what he wrote then:

9/11 was, of course, the first of the major JFK-Challenger-Pearl Harbor-style crises to occur in the internet age, meaning that it has an electronic trail unprecedented in history. It is the first tragic moment in history (of hopefully only very few) that transpired on a relatively mature internet which distributed what information it could as rapidly as possible. Snopes might have frowned on what we were reading, but the internet was still pivotal in assuring that we understood what was happening. It was, perhaps, a key moment in the transition from television’s dominance to the supremacy of the web.

Social media has added a new dimension to this. Now everyone is their own potential broadcast outlet, contributing to the common pool of knowledge, but also telling their own story. I’ve had many conversations with people reflecting on what 9/11 would have been like with Twitter — and Twitpics (and as I write this from 30,000 feet on board an American Airlines flight bound for California, one more thing occurs to me: In-flight wifi. Imagine the information-sharing that might have been). The common thread, though, is that people would be active — leaping for that blackberry to add their update, documenting it all in real time. That is the impulse we now share as a modern society — an outgrowth, I think, of that same impulse that has always driven us to gather around the television. It’s the flipside of the impulse to know more — it’s the impulse to share, so that we all know more.

So that’s why I freaked out when Jose’s Facebook page lay dormant, except for message after worried message piling up. I figured that he would update it when he could, and the fact that it had taken hours and then a day for that to happen — well, in this wired era, an hour is a long time and a day is an eternity. I didn’t account for a 17-hour drive through and around wreckage in Chile, of course; sending an email is easy, as long as you can get to your technology. Until you do, though, there will be a vigil waiting at your Facebook page. In this wired era, the flipside is that it takes just as little time for people to let you know they care.

Full-sized image of Jose’s FB page — finally updated! — below, with permission; and yes, this is me shamelessly posting photos of him with his adorable son, Luca, in the newsroom at NY1, where he works at NY1 Noticias, and out in the crisp fall air of the West Village. Needless to say, I am glad they are okay! 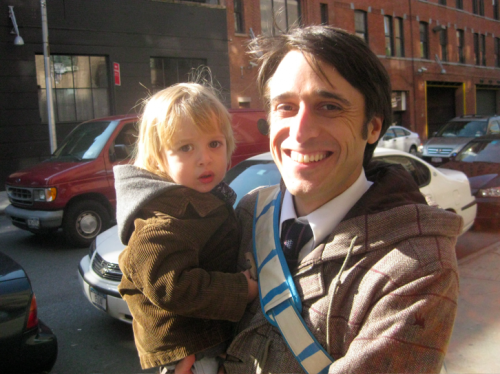