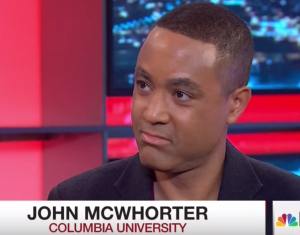 Linguistics Professor John McWhorter is no dummy, which makes it tough to conclude that his recent campaign against the #BlackLivesMatter movement is anything but a bad-faith attempt at contrarian concern-trolling, for whatever reason. McWhorter has a tendency (at times admirable) to pose himself as the voice of reason between those who are in denial about racism, and those who are just too sensitive to it. Like him or not, McWhorter usually manages to pull off some assemblance of intellectual honesty, and contributes something useful to the conversation.

None of that can be said for his recent concern-trolling essay about the #BlackLivesMatter movement in The Daily Beast, or his subsequent media appearances flacking it. McWhorter is already getting rave conservative reviews over his appearance on CNN, where, according to Breitbart News, he “exposed the major flaws in the Black Lives Matter movement, asserting that the group is ‘living in the past’ and pointing out that America won’t actively engage in the group’s demands as long as they continue to ignore the fact ‘that black people in poor neighborhoods are in vastly more danger of being killed by young black men than by the occasional bad cop.’”

On Monday night, McWhorter appeared on All In with Chris Hayes, and although Hayes has been a steadfast supporter of the #BlackLivesMatter movement, the result was a chummy interplay on McWhorter’s analysis, rather than the bare-knuckled fisking it so richly deserves. At one point, McWhorter actually says he doesn’t see the difference between state violence and civilian criminal violence, and Hayes just calmly fleshes out the nuance:

I get that these two are pals, but someone has got to call out the flat-out dangerous garbage that McWhorter is peddling, and I doubt it will be the host of whatever cable news show McWhorter pops up on next.

In order to fairly evaluate McWhorter’s piece, it is important that you read the whole thing so you can fairly judge, for yourself, the utility (let alone the sincerity) of his repeated professions of love and support for #BlackLivesMatter. I won’t recount them, because the balance of the piece renders them moot. Let’s stipulate that John McWhorter really loves BLM, and just wants what’s best for them. He’s “worried,” or, you might even say, concerned:

But this, even with the careful hedges, is a hasty, and even lazy, reading of the issue. I imagine there are some people out there who don’t like BLM because it’s black people making noise. But what disturbs a great many—and I highly suspect many more—people about the philosophical underpinnings of BLM is that black people in poor neighborhoods are in vastly more danger of being killed by young black men than by the occasional bad cop.

“Our demand is simple: Stop killing us,” the movement says—while people nationwide look on and see, especially during the summers, tragic epidemics of black-on-black homicides and maimings in one city after another. But America wonders: What about “Let’s stop killing each other”?

McWhorter also tries to head off the obvious fact that activism around violence in the black community goes back a very long way by asserting that “indignation about cop murders is so vastly hotter and more sustained.” The truth is that such activism isn’t ignored by black people, it’s ignored by the white media. If white kids bought 20 million copies of “Self Destruction” instead of “Straight Outta Compton,” maybe things would be different.

Ironically, McWhorter also ignores the truth that it only took one cop blaming #BlackLivesMatter for a police officer’s death to scare the media off of giving the movement positive attention. Since that incident, coverage of the movement has been cut in half, and consists largely of the type of criticism that McWhorter levels.

But even if nobody, anywhere, were paying attention to black-on-black crime, McWhorter’s premise is idiotic on its face, like telling breast cancer activists to stop ignoring heart disease. He’s only really able to make this suggestion with a straight face by denying that there’s a difference between police violence and community violence. Unfortunately, McWhorter’s premise is handily defeated by… John McWhorter:

Imagine if in 1965 when the Selma marchers walked across the Pettus bridge, black boys had been killing each other by the dozens over on the other side all summer, with that considered regrettable but ultimately “beside the point.”

Here’s a news flash: black people were killing black people in 1965, at similar rates as they are now, and then, as now, it wasn’t “beside the point,” it just wasn’t the point of the Civil Rights movement because then, as now, when black people kill anyone, they get arrested for it. There is no policy “ask” for black-on-black crime, other than for police to spend more time protecting black people, and less time stopping, frisking, shooting, or choking them to death, which they are already asking for!

Finally, McWhorter uses (out of context) the one time Black Lives Matter activists got cute while confronting Hillary Clinton to assert that they were late to the table with specific demands, when surely he knows that they were demanding things like body cameras, independent investigations, and an end to Stop and Frisk since before they had a name.

I’ll leave it to others to divine why it is that McWhorter has decided to spread this pack of lies, but even assuming the purest of motives, it is dangerous. Black Lives Matter, as he notes, has moved mountains when it comes to making pro-black policies a real possibility. That doesn’t mean they’re above reproach, but if you’re going to come for them, you’d better come correct. This isn’t that.