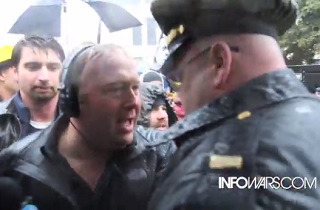 If the “official” news about Friday’s 50th anniversary of the assassination of President John F. Kennedy got to be a little too stirring or thought-provoking for you, you might have dipped into conspiracy Wheel of Fortune Alex Jones’ world via coverage of his protest, which included urgent pleas to “Stop the cover up!”, punctuated by intermittent demon possession by the soul of Sam Kinnison.

During Jones’ wall-to-wall coverage of his Dallas shoutfest, he described the mayhem:

One of them punched me, from about six inches away, looking that there were no cameras — pow, hoping I’d do something. But it was into my rib, it wasn’t that bad. … It did take me off guard and then [mimes being struck] “boom!” “boom!” “boom!” “boom!” and we’re like, “Woah, let us go!”

It turns out, though, that the fascist Tiananmen Square Nazi thug was caught on video, along with what Infowars describes as a “Rampaging Federalized Police Force” carrying out a “violent attack against peaceful demonstrators.”

Based on the accompanying video, the “violent attack” consisted of Dallas Sheriff’s officers pushing, while also sauntering, but it also isolates the period of time during which Jones says he was punched. It’s hard to tell in the original, so we’ve Zaprudered it for you to make it easier to tell where the punches occurred:

As this video clearly shows, there were definitely punches thrown in Alex Jones’ mind, a place where, in the full video, that confrontation also nearly escalated from aggressive strolling to an all-out lead-spraying massacre, prevented only by Jones’ Spock-like restraint. Enjoy, from Infowars: