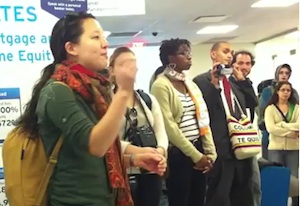 Video from inside the Citibank where 23 Occupy Wall Street protestors were arrested appears to show demonstrators yelling at bank employees and ignoring warnings by security to take their protests outside.

“We were asked to leave by management, but chose to keep on talking,” Elana Carroll told Gawker‘s Max Read. “Our talk was slowing down and coming to a close. We had been inside probably between 10 and 20 minutes total when suddenly we heard “doors are being locked now!” from one of the men who’d been standing in the doorway.”

Jeremy Bloom from Red, White and Green thought that protestors shouldn’t have made a big scene, but the bank was out of line for trapping them inside. “The demonstrators were stupid for trying to talk to the folks at Citibank, rather then just shutting up and closing their accounts. But Citibank was stupider for locking the doors and having all of them ARRESTED, instead of, for instance, having the police escort them off the property.”

While others may criticize how Citibank handled the protestors, the video footage appears to confirm the bank’s account of what happened inside: “A large number of protesters entered our branch at 555 La Guardia Place around 2:00 PM today. They were very disruptive and refused to leave after being repeatedly asked, causing our staff to call 911. The Police asked the branch staff to close the branch until the protesters could be removed. Only one person asked to close an account and was accommodated.”

Watch the protestors inside the bank below: