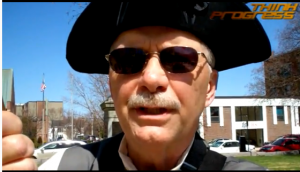 Think Progress blogger Igor Volsky uploaded a video taken at a Tea Party convention in New Hampshire, where event-goers were asked if and how their lives have changed since The Granite State legalized same-sex marriage in 2010. The reaction from those interviewed was basically akin to web commenters clamoring to type “boring post, who the f**k cares?!” One man said, “No, not really. It hasn’t really affected me, and I don’t think that’s a priority right now for most people,” and another simply said that, “if you’re in love with somebody, then it’s all good.”

It’s an interesting video because it brings up a lot of questions about the way the Tea Party movement is generally depicted and covered. On Good As You – a site devoted to activism within the gay community – the video is given a funny headline and minimal introduction (it notes that Volsky is a friend to the site), pretty much allowing viewers to make up their own minds about what the video is actually about. On Buzzfeed, however, things get a little more politicized, with the video description reading “For once, the Tea Party gets something right.”

And it’s not like viral news and entertainment site’s commenters were about to let that little blurb go by without, well. Commentary. Writes “aaronb18:”

The Tea Party isn’t about gay marriage. It is about lower taxes and less governmental involvement. You guys love to frame stories. And how many conservative stories are you going to run prefaced by “for once”? Maybe it isn’t for once after all.

Another commenter, the Simpsonsly-named “Stupid Flanders,” thought the video was a refreshing look at Tea Party members, and noted that most of the digital ink spilt over the movement at Buzzfeed is not exactly positive:

I’m sure there were some who came up with some dumbass rant about how they were personally affected by the legalization of same-sex marriage, but they were wisely not included in the video. However, it’s nice to see that not all Tea Party members are unevolved, unreasonable people, as one would think from the typical Buzzfeed “Tea Party” posts.

The people of New Hampshire want their guns and the lowest taxes possible. They don’t typically get wrapped up in the overly religious moralistic crap of southern style conservatives.

Who knows whether the video was edited in such a way as to make a specific point (…That Tea Party members aren’t inherently homophobic? That the issue of same-sex marriage isn’t even a big deal for the group commonly held up as hateful and reactionary, so why should it not legal across all states? Your guess is as good as mine.), but we personally found it interesting to happen across a video about the Tea Party, think we absolutely knew where it was going, and be surprised. It goes to show how very narrow – and how very predictable – so many media outlets (from evening cable political shows to fun, addictive websites mostly devoted to puppy videos) happen to be when it comes to carving out very specific roles for different segments within the U.S.

We see that Tea Party members aren’t inherently insane, or hateful, or out to hunt gay babies under cover of darkness. And we think that most people, on an intellectual level, fully understand that as well. But it’s not like that ever makes for good TV, right? It doesn’t make for a compelling narrative, or a fun villain (or, alternately, an easy canvas onto which truly hateful people can project their own fears and prejudices).

So. Have a look for yourselves, and let us know what you think:

h/t Good As You via Buzzfeed