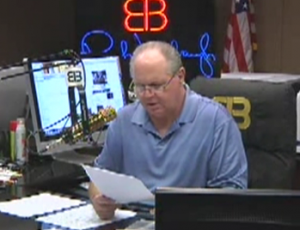 Rush Limbaugh not surprisingly did not “like” the status of yesterday’s Facebook forum with President Obama. Rush believed that between Obama and Republican Congressman Paul Ryan, it’s obvious “who is classier here” and then really took off the gloves for Obama.

Rush suspected that questions from the town hall audience were planted to make Obama look good, but Rush falsely stated that “none of the questions came from Facebook users, they were all from Facebook employees.” As anyone who sat through the entire forum can attest, including our Senior Editor and Video Director Jon Nicosia, the questions did not solely come from Facebook employees (see the clip below for evidence of such questions). Rush was on more confident ground, however, after reading an article from The New York Times quoting Ryan’s perspective on Obama’s budget strategy:

Rush praised Ryan’s attitude before turning back to Obama:

“We’re always told of the elegance of Obama, the high class, decorum exhibited by President Obama – he’s a street thug. As a community organizer that’s what you are, you’re a street thug. Elegance, eloquence, whatever you’re going to call it. Here’s this little man-child running around saying that Ryan isn’t courageous and his bill isn’t courageous.”

Rush’s final blow was concluding Obama is worried that Ryan’s budget would drastically change the “social compact,” which Rush interprets to mean is Obama’s simple belief that “the state defines fairness, the state has subjects – we’re all subjects, he’s the ruler.”

Watch the clip below from The Rush Limbaugh Show and below that is a clip of two audience questions from non-Facebook employees during yesterday’s Facebook Forum with the President: