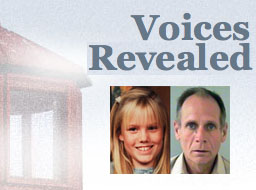 As the case moves into the national news dialogue, one of the most peculiar twists in the disturbing story of the California kidnapper Phillip Garrido is the blog he kept, Voices Revealed, and the subsequent reaction to his story from the online community.

Now that the accused has finally been apprehended, nearly two decades after kidnapping Jaycee Dugard, internet commenters are taking to Garrido’s website to condemn his deplorable actions. It’s truly a 21st century phenomenon for angry onlookers, searching for a bit of twisted catharsis, to voice their contempt “directly” at a man who will likely never see his website again.

As Gawker reported, Garrido kept the blog in the name of the church he founded, God’s Desire, and wrote cryptically about his connection with “the Creator” and his own supernatural powers: “This document is to affirm that I Phillip Garrido have clearly demonstrated the ability to control sound with my mind and have developed a device for others to witness this phenomena.”

But in this super-connected world, what happens when a criminal makes his derranged musings public and upon his arrest, leaves a blog behind? We’re finding out firsthand in real-time through the case of Phillip Garrido.

Though the number is quickly rising, over 200 comments have been posted so far on the blog’s most recent entry, nearly all of which explicitly address Garrido and his wife. The first comment reads:

“When the voices tell you to kidnap and rape children, it’s not God. It’s your own crminal self, Mr. Garrido! I hope you rot in jail and burn in Hell.”

Seven hours later, the mood remains the same as one person writes:

The rest of the above comment is far more graphic, wishing Garrido a dreadful prison stay — a common thread in the mostly fuming remarks.

Surely, the blog raises a lot of questions about crime in an age where almost nothing is private, and it will be interesting to see if the site is taken down or the comments locked, and how it may be used in court. But equally fascinating is the psychology of the reactions, anonymous and angry as they are. As online user-generated content and response remove the buffer that traditional media upheld — in this case, allowing the public to “speak directly” to their villainous nightmare — the result sometimes startling.