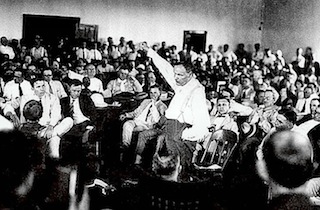 According to a new investigative piece on POLITICO, taxpayer money via voucher programs is being used to fund a phalanx of not just creationist but fully anti-science curricula in private schools.

Stephanie Simon’s exposé examines the almost $1 billion of public funds, spread across fourteen states, that goes to textbooks and curricula that venture beyond six-day creationist theories to ignore or actively dispute modern scientific and mathematical findings:

Their course materials nurture disdain of the secular world, distrust of momentous discoveries and hostility toward mainstream scientists. They often distort basic facts about the scientific method — teaching, for instance, that theories such as evolution are by definition highly speculative because they haven’t been elevated to the status of “scientific law.”

[snip] One set of books popular in Christian schools calls evolution “a wicked and vain philosophy.” Another derides “modern math theorists” who fail to view mathematics as absolute laws ordained by God. The publisher notes that its textbooks shun “modern” breakthroughs — even those, like set theory, developed back in the 19th century. Math teachers often set aside time each week — even in geometry and algebra — to explore numbers in the Bible. Students learn vocabulary with sentences like, “Many scientists today are Creationists.”

Simon’s article is backdropped by a well-funded push to expand voucher programs in dozens of states, to the point that many worry it could erode public school standards. “I don’t think the function of public education is to prepare students for the turn of the 19th century,” quoth Eric Meikle, project director at the National Center for Science Education.