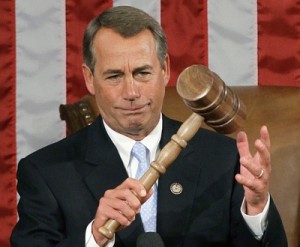 After a string of qualified “successes” in the game of legislative chicken, congressional Republicans may have finally met their Dead Man’s Curve. With time running out on the payroll tax cut extension that will affect 160 million Americans, Republicans in the House rejected a bipartisan Senate compromise to extend the payroll tax cut for two months in transparently cynical fashion. Now, the conservative Wall Street Journal is calling their strategy a “fiasco,” and questioning the GOP’s chances at taking back the Senate in 2012.

For weeks, President Obama has been calling Republicans out for their double-talk on tax cuts, and recent polls show it may be having an impact on his approval ratings. When Republicans wouldn’t agree to a one-year extension of the tax cut, the Senate reached a bipartisan deal that extended it for two months, preventing a tax hike, while allowing both sides time to negotiate a longer extension. On Tuesday, House Republicans rejected the deal, demanding a conference committee with the Senate to negotiate a yearlong extension.

President Obama called them out yesterday, telling reporters at a White House briefing that “the House Republicans say they don’t dispute the need for a payroll tax cut.  What they’re really trying to do, what they’re holding out for, is to wring concessions from Democrats on issues that have nothing to do with the payroll tax cut — issues where the parties fundamentally disagree.”

Now, the Wall Street Journal has weighed in, in an editorial entitled “The GOP’s Payroll Tax Fiasco,” that explains just how badly Republicans have blown the politics on this issue:

If Republicans didn’t want to extend the payroll tax cut on the merits, then they should have put together a strategy and the arguments for defeating it and explained why.

But if they knew they would eventually pass it, as most of them surely believed, then they had one of two choices. Either pass it quickly and at least take some political credit for it.

Or agree on a strategy to get something in return for passing it, which would mean focusing on a couple of popular policies that would put Mr. Obama and Democrats on the political spot. They finally did that last week by attaching a provision that requires Mr. Obama to make a decision on the Keystone XL pipeline within 60 days, and the President grumbled but has agreed to sign it.

But now Republicans are drowning out that victory in the sounds of their circular firing squad. Already four GOP Senators have rejected the House position, and the political rout will only get worse.

The prescription, says the WSJ, is for Republicans to “cut their losses and find a way to extend the payroll holiday quickly.”

There’s just one problem with that plan, and with WSJ‘s analysis: it assumes a modicum of good faith among the House Republicans who are revolting (or is that “House Republicans, who are revolting?”). Speaker Boehner and the sane members of the House realize that they have to pass the payroll tax cut extension, if only because nearly everyone agrees that failure to do so will harm the economy.

But for some Republicans, the prospect of a worsening economy during an election year may hold some appeal. For those who see the US economy as a pile of chips in a poker game, it’s a bet that voters will blame the President more than they blame Congress. Unfortunately, 160 million Americans are the ones who are “all in.”