WaPo Fact Checker: ‘No, CBO Did Not Say Obamacare Will Kill 2 Million Jobs’

WaPo Fact Checker: ‘No, CBO Did Not Say Obamacare Will Kill 2 Million Jobs’ 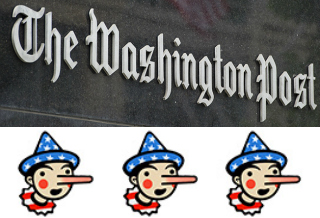 Conservative critics of the Affordable Care Act have immediately and fervently latched onto one line from the Congressional Budget Office’s new 182-page report regarding the economic impact of Obamacare: “The reduction in CBO’s projections of hours worked represents a decline in the number of full-time-equivalent workers of about 2.0 million in 2017, rising to about 2.5 million in 2024.” But what exactly does that mean?

Washington Post fact checker Glenn Kessler has given “Three Pinocchios” to anyone claiming that means Obamacare will “kill” 2.5 million jobs over the next 10 years, as numerous commentators and writers have done so far Tuesday.

He points to the tweet below from the NRCC, but there have also been numerous others from Republican lawmakers:

Obamacare will cost "the nation about 2.5 million jobs" – CBO #FullRepeal

Obamacare will cost our nation about 2.5 million jobs and increase the deficit by $1 trillion.

CBO: Obamacare will push 2 million out of labor market. Why? Government programs incentivizing people not to work. http://t.co/0edqRH5cke

The crux of the issue lies in the reason for the reduction in worker hours, estimated to be “about 1.5 percent to 2.0 percent during the period from 2017 to 2024.” It is not, as some have suggested, because employers will stop hiring full-time workers, but because those workers will voluntarily decide to work slightly less. Essentially, it’s an issue of supply rather than demand.

First, this is not about jobs. It’s about workers — and the choices they make.

The CBO’s estimate is mostly the result of an analysis of the impact of the law on the supply of labor. That means how many people choose to participate in the work force. In other words, the nonpartisan agency is examining whether the law increases or decreases incentives for people to work.

Because health care subsidies decrease as people earn more income, some may choose to work less in order to gain more. That is not the same as the government “killing” jobs. Or, as Kessler puts it in his conclusion:

Some might believe that the overall impact of the health law on employment is bad because it would be encouraging people — some 2.3 million – not to work. Indeed, the decline in the workforce participation rate has been of concern to economists, as the baby boom generation leaves the work force, and the health care law appears to exacerbate that trend.

Moreover, the argument could go, this would hurt the nation’s budget because 2.3 million fewer people will pay taxes on their earnings. That’s certainly an intellectually solid argument — though others might counter that universal health care is worth a reduction in overall employment — but it’s not at all the same as saying these jobs would be lost.

Once again, we award Three Pinocchios to anyone who deliberately gets this wrong.

Obamacare’s critics can claim that the equivalent of 2.5 million less full time workers in the system is bad for the economy, and many will make that argument. But Kessler and others laid out how saying that the CBO claims Obamacare will “kill,” “cut,” or generally eliminate jobs from the market over the next 10 years is patently false.