WaPo Reporter Fires Back at Woodward for Insulting His NSA Reporting

WaPo Reporter Fires Back at Woodward for Insulting His NSA Reporting 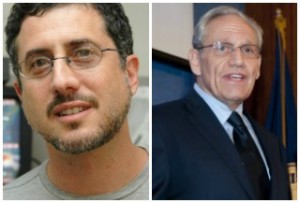 Longtime Washington Post fixture and journalistic icon Bob Woodward stirred the pot this week when he openly complained about how news organizations have handled the Edward Snowden NSA leaks. One of those news organizations happens to be the Post, and reporter Barton Gellman fired back at his colleague Woodward for dismissing all the reporting that’s been done so far.

Woodward didn’t address the fact that one of his own paper’s reporters was working on the story, but Gellman told The Huffington Post that it’s a plain and simple insult to all the people who have worked on the story thus far.

“I can’t explain why Bob would insult the source who brought us this extraordinary story or the exemplary work of his colleagues in pursuing it,” Gellman said in an email to HuffPost Thursday.

“The ‘others’ he dismissed include [The Washington Post’s] Greg Miller, Julie Tate, Carol Leonnig, Ellen Nakashima, Craig Whitlock, Craig Timberg, Steven Rich and Ashkan Soltani — all of whom are building on the Snowden archive with me to land scoop after scoop,” Gellman continued. “I won’t get into why Snowden came to me or didn’t come to Bob. But the idea of keeping Snowden anonymous, or of waiting for one ‘coherent’ story, suggests that Bob does not understand my source or the world he lived in.”

Washington Post executive editor Marty Baron also defended the paper’s coverage and the people at the Post working hard on it. Glenn Greenwald, one of the other major reporters on the Snowden beat the past few months, continued piling on, calling Woodward “bitter” and “petulant.”