The Kennedy Assassination: A Guide to Must-Reads About November 22, 1963 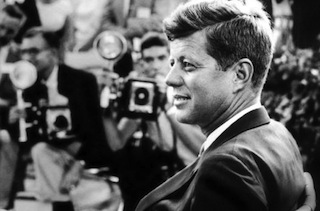 The assassination of John F Kennedy was a cataclysmic event the scope of which nearly defies human comprehension. As the collection of links below shows, in drastically altering the course of American history it touched almost every life in the nation, from Polish tailors on the Lower East Side to Fort Worth art vendors to the strangers recruited to serve as pallbearers for Lee Harvey Oswald.

As a result the assassination and its reverberations promoted ordinary objects into historical significance, turning hotel paintings and doctors’ wristwatches into witnesses to history. It has even made itself felt in absences, in the places Kennedy should have gone, the speeches he would have made, the people he could have addressed.

Here is a panorama of the days in the United States before, during, and after the assassination.

PEW looks at Kennedy’s standing in 1963, finding an optimistic internationalist populace giving him a 70% approval rate early in the year. This approval rating slipped to 59% after his civil rights speech in June, which much of the erosion happening in the south. A majority thought race was the preeminent challenge facing the country, and were not assuaged by the March on Washington, with which Kennedy had ambiguous relationship.

The Day Before JFK Was Assassinated (Timothy Noah, MSNBC)

Noah recreates the world of November 21, 1963, when Mary McCarthy’s The Group was a national bestseller, It’s a Mad, Mad, Mad, Mad World was in theaters, Ronald Reagan was still an actor (and only recently a Republican), England was just reporting, condescendingly, about this “Beatles” band, and a 17-year-old Diane Sawyer had recently been crowned Junior Miss. Most ominously, the best-selling non-fiction book of the week? JFK: The Man and the Myth, a takedown of the president.

“I’m extremely proud to see so many Texas Democrats,” the President was supposed to say to a banquet crowd in Austin, TX that evening. “From what people are trying to say, you’d think there weren’t this many Democrats left in the whole state!” Kennedy’s prepared remarks were also peppered with local color, courtesy Governor John Connally, about Darrell K. Royal and the UT Longhorns.

Speaking of Connally, here’s a profile of his wife, Nellie, from Texas Monthly.

Here’s The Artwork That JFK Saw The Night Before He Died (Christina Sterbenz, Business Insider)

The Dallas Museum has collected all the pieces of local Fort Worth pieces picked specifically for JFK’s hotel room the night before the shooting—which Fort Worth saw as a coup over its prominent neighboring polis.

The Vice President was on his home turf on the trip, and was supposed to visit a synagogue in his former congressional district. LBJ ended up keeping his promise, arriving a month later—as President.

The story behind the last photo of the famous couple: 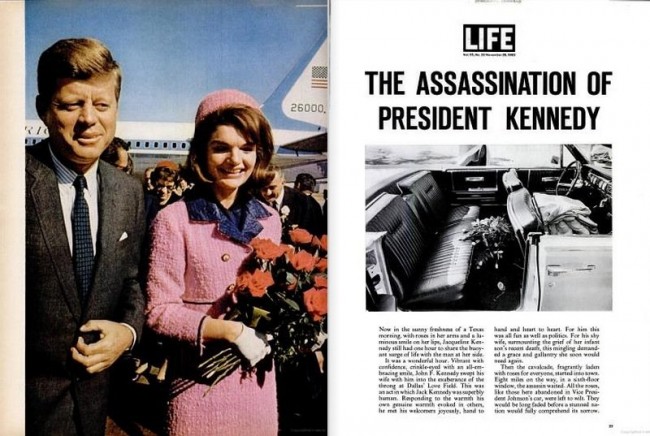 From two years ago, an Errol Morris short about “the only man in Dallas under an umbrella,” who just happened to be standing by the limousine when the shots rang out. Conspiracy theorists have speculated that the umbrella was some sort pneumatic assassination device. That is, until Umbrella Man came forward with the real story…

Up For Auction: Watch Believed To Be Used To Declare JFK’s Time Of Death (Ula Ilnytzky,Talking Points Memo)

Jackie’s famous dress wasn’t actually from Chanel, but from a tailor’s shop in the Lower East Side. Here’s the story of the Jewish Polish immigrant who made it.

And, of course, the cover: 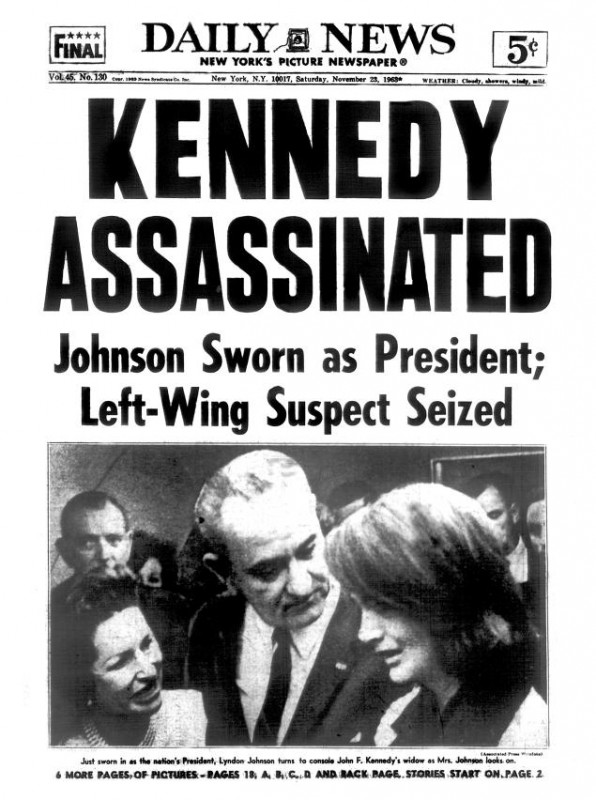 Historical Trivia of the Day, Poorly-Timed Magazine Cover Edition (Evan McMurry, A Flea in the Fur of the Beast)

Yeah, I’m linking to myself. But this anecdote—about a young Republican intellectual magazine that printed 70,000 copies of their make-or-break issue featuring a cover mercilessly mocking Kennedy on November 22, 1963—is worth it.

Bronx Tale of a BB Gun and Infamy in the Making (Dan Barry, New York Times)

About a New York City landlord who caught one of his teenage tenants practicing with a BB gun. The boy’s name? Lee Harvey Oswald. The New York Times recalls the assassin’s teenage years through his NYC neighbors.

A remembrance of what had to be one of the saddest funerals of all time. Not even the minister showed up. Cochran writes:

Shaking his head ever so slightly, Jerry Flemmons of the Fort Worth Star-Telegram turned to me and said, “Cochran, if we’re gonna write a story about the burial of Lee Harvey Oswald, we’re gonna have to bury the son of a bitch ourselves.”

Cochran ended up helping for the real reason reporters do anything: the scoop.

“May God Be With You, My Dear Mrs. Kennedy” (Pamela Coloff, Texas Monthly)

The letters from Texans to Jackie Kennedy, expressing guilt, grief and remorse over their state’s role in the assassination.

The spontaneous displays of grief from New Yorkers following the assassination.

62-29%, appropriate for the event that mainstreamed conspiracy theories.