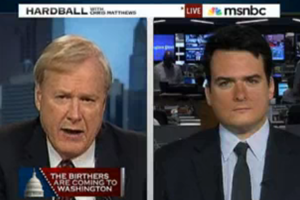 Washington Post reporter Dave Weigel, who writes the paper’s Right Now blog, ignited a firestorm of criticism when he described opponents of gay marriage as “bigots” on his Twitter account Saturday. Now, amid accusations of bias, Weigel has apologized for his word choice.

Now that he has apologized, conservatives would be well served not to pile on, and those who think he shouldn’t have apologized should hear Weigel out.

I’m a fan of Weigel’s column, and of his refreshing presence on MSNBC’s Countdown, but my initial reaction was that he should not have caved in. I found it ironic, as well, that in criticizing people who are biased against gay people, he ended up copping to a bias of his own:

First, I apologize for calling same-sex-marriage opponents “bigots.” I was specifically referring to people who spend their working hours opposing gay marriage, not just people who vote to ban it. But those people aren’t bigots, either…..

…But who’s threatened by legal same-sex marriage? Whose life is made worse? If there was science suggesting that children raised by same-sex parents are worse off than children raised by traditional families, that would be one thing, but I haven’t seen it. We’ve watched legal same-sex marriage in several European countries and several states, and it hasn’t ushered in some decline in the quality of life, or marriage, for those who don’t participate in it.

That’s what I don’t understand. That’s my bias, for now. I’ll happily entertain arguments for the contrary.

To my mind, that’s a bias he can be proud of. I asked Weigel if he found the accusation of being biased against bias ironic.

I really do regret saying “bigots.” I like to follow a policy of calling people what they want to be called — or at least don’t object to being called. This is why you don’t see me call people “teabaggers.” I’m a Methodist, and I am friends with plenty of people who disagree with me on this issue, and understand how it’s not really comparable to, say, anti-black racism. Many opponents of gay marriage take that stance because they believe that gays are misled, and they can lead another lifestyle. I disagree, but believing so is not “bigoted.”

I like what he had to say about calling people what they want to be called. “Teabagger” outlived its usefulness a long time ago. It was funny and edgy for about 5 minutes, but now, like most name-calling, it’s just an obstacle to understanding.

As for whether the gay marriage opponents whom Weigel describes are “bigoted,” I suppose you could argue that the element of hatred isn’t there, and amend that to “ignorant.”

In any case, I hope there’s no movement to oust Weigel from WaPo. His reporting on the conservative movement is far more useful to the right than a raft of cheerleading blogs. He’s in a position to offer fair, tough-love analysis to the GOP that they won’t get somewhere else. Besides, better the devil you know. Would conservatives like Matt Lewis prefer someone like Markos Moulitsas to cover them?