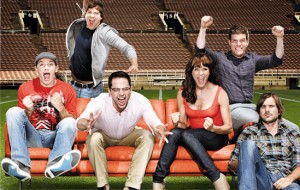 Fantasy sports generates an estimated $2 billion per year. Some 30 million people play. There’s a television show — FX’s The League — created by a former Seinfeld writer and Curb Your Enthusiasm executive producer, based on a group of friends in the same fantasy football league. There are magazines, websites, and podcasts dedicated to the game. Matthew Berry, ESPN’s senior director of fantasy sports, has over 300,000 Twitter followers. He hosts a fantasy show on ESPN2 every Sunday morning. MLB Network has their own fantasy show (The Fantasy 411) that airs daily during the baseball season. And, for the last five months, according to USA Today‘s Fredreka Schouten, fantasy sports has its own lobbyist, a man named Travis McCoy. It was revealed this week that he hasn’t been incredibly busy, as the lobby has only spent $6,000 since May.

The fantasy sports industry needs a lobby, according to McCoy — a former aide to Speaker of the House John Boehner — because almost a dozen states still have laws against the games and the prizes they offer. These still stand even though federal law explicitly excludes fantasy sports from being classified as gambling. The language comes from 2006’s SAFE Port Act, which had an amendment, the Unlawful Internet Gambling Enforcement Act, that made the sentiment clear. Still, not all states are convinced:

“In Louisiana, for instance, state Rep. Thomas Carmody last year pushed a measure that would have exempted fantasy games from a state anti-gambling provision. The Shreveport Republican says he decided to act after a childhood friend was barred from collecting his prize of a T-shirt from an online baseball fantasy game.

The measure, however, died 73-16 in the state’s House of Representatives after Louisiana Family Forum objected.”

Louis M. Maione, CEO of RotoMedia, the company that owns and operates fantasy advice site RotoExperts.com, tells Mediaite that even though just $6,000 has been spent, he considers it just the beginning. He believes that, even with the large numbers fantasy sports can boast, it’s still growing. “It’s just now entering popular culture, with television shows, a radio station dedicated to it, and the NFL embracing the game,” Maione says. “Wait five years. Those numbers are going to be through the roof.”