WATCH: Did a Camera Wire Interfere With Crucial Play in Raiders-Chiefs Game?
video

WATCH: Did a Camera Wire Interfere With Crucial Play in Raiders-Chiefs Game? 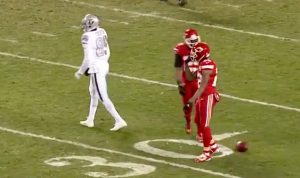 Thursday night in Kansas City, the Chiefs won the pivotal AFC West showdown against their longtime rivals, the Oakland Raiders, by a 21-13 final. But in securing the victory, Kansas City may have gotten some help from above — in the form of a camera wire.

A crucial 4th quarter pass by Raiders quarterback Derek Carr may have hit a wire as it made its way to wide receiver Amari Cooper, before it eventually fell incomplete. You can see Cooper change direction on the ball late, as it did seem to change direction.

The play happened with less than 10 minutes left, and the Raiders trailing by eight. Cooper was wide open, and may have been able to go all the way if the pass had been completed in stride.

Did the wire interfere? You be the judge.

According to ESPN, Cooper said the ball did indeed move at the last second.

“That’s why it looked like I might have stumbled,” Cooper said. “I was running in the right direction and it kind of moved inside at the last minute and I didn’t have time to get it.”

NBC Sports spokesman Dan Masonson gave a statement to sportsvideo.org in which he denied that the so-called “Spidercam” had anything to do with the play.

“The overhead camera is positioned behind the line of scrimmage, so the cables would not be in play,” Masonson said.

Whatever happened, it’s a very tough break for Oakland, which is now trailing Kansas City in the AFC West. (The two teams have the same record, but Kansas City has the tiebreaker thanks to two head-to-head wins.)