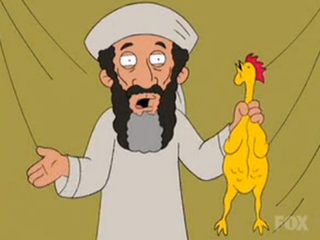 After a decade of bittersweet Tupac and Biggie jokes about the seemingly interminable release of Osama Bin Laden terror propaganda videos, today’s release of several new Bin Laden tapes by the Pentagon– particularly one deemed a “blooper reel” of Bin Laden flubbing his lines was a bit of a catharsis for the exhausted “War on Terror” news cycle. But for one group of comedians, the footage of a white-robed Bin Laden missing acting cues must look eerily familiar– take a look at Family Guy‘s Osama Blooper Reel from 2006?

The real videos the military released today are part of the largest cache of high-level terrorist intelligence ever collected, and showed Bin Laden before a plain background, clad in a white robe and hat and getting all his lines wrong. While he doesn’t laugh at himself, he does turn to someone off-camera, indicating he has erred. This, CNN concludes, indicated there was a team of people behind the releases, and that Bin Laden had camera operators and writers around to make him look good (the releases also show Bin Laden was a fan of dying his beard to look more youthful).

Meanwhile, back in 2006, Family Guy‘s Bin Laden wore the same thing, stood before the same background, and mistakenly called the holiday Ramadan “Radaman,” and chortled his way through the entire video, bringing in props and chumming around with the camera. Clearly no one quite had the pulse on Bin Laden at the time better than Seth MacFarlane. Or perhaps Bin Laden began recording and saving his blooper reels after he saw how appealing his animated self was to an American audience when wearing oversized sunglasses.

Below are both the real Bin Laden videos (via CNN) and the prophetic Family Guy episode. Life imitating art or art predicting life? You decide: