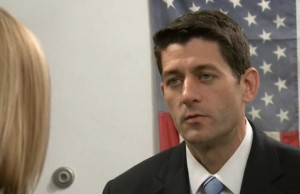 While crack WitSec agents are busy establishing new identities for the Romney family, former Romney running mate Rep. Paul Ryan has begun doing interviews in which he blames the crushing Romney/Ryan defeat on “the turnout, especially in urban areas,” and not on Mitt Romney‘s policies, or on Paul Ryan’s budget. This is the kind of thinking that will, hopefully, guide Republicans during their tour of the political wilderness, and lead them to a promised land of ever-diminishing votes. Yes, Paul, it wasn’t your lousy game plan, it was just the surprising number of touchdowns the other team kept scoring on you that lost you the game.

It’s true that immediately blaming minorities (yes, Virginia, that’s what “urban” means) for his electoral loss is exactly the kind of attitude that helped turn minority voters out against Paul Ryan and Mitt Romney, but Ryan’s mistake is in thinking that his policy ideas are somehow immune to that contemptuous attitude. In this interview with WISC, reporter Jessica Arp asked Ryan what surprised him about election night. “I think the surprise was some of the turnout, especially in urban areas, which gave President Obama the big margin to win this race,” Ryan replied.

Arp later asked Ryan if this election was a referendum on his budget. “I don’t think we lost it on those budget issues,” Ryan replied. “What I got out of this is that people don’t want only Republican ideas, or only Democratic ideas, they want us to come together for common ground and work this out.”

Someone also seems to have agreed to pay Ryan five bucks every time he says “we have divided government,” because he spat the phrase out during this interview like he was warding off evil spirits. The fact is that the country voted for President Obama’s ideas, and the Democrats gained seats in both houses of Congress, and were only prevented a shot at controlling the House of Representatives by gerrymandering. But that overwhelming victory was obviously about urban turnout, not policy, which are in no way connected. Republicans have gotten very creative at laying the blame for this election, but they all seem to agree that all they really need to do is pretty up their wording a little, and they’ll be just fine. Good luck with that.

The other interesting takeaway from this interview was that Ryan threw in the towel pretty early on Election Day. “It looked like, to me, sometime early in the evening, that it just wasn’t going to happen,” he told Arp. It would have been a kindness for him to have sent Karl Rove that memo, as well.

Despite all of his brave security blankie talk about “divided government,” the overall impression here is of a chastened Paul Ryan who seems to have some idea that he and his colleagues are facing the wrong way in a shitstorm where the fiscal cliff is concerned. Hope springs eternal.

Here’s the interview, from WISC: