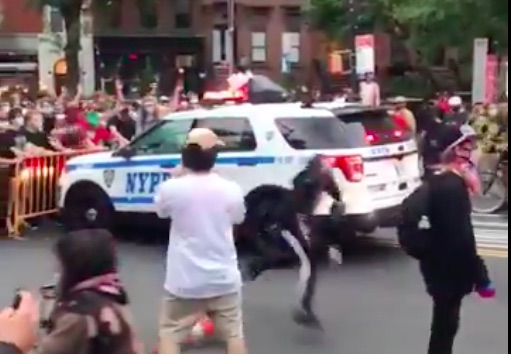 As tensions flare in cities around the country as people protest the killing of George Floyd by Minneapolis police officers, troubling scenes are being captured by eyewitnesses’ mobile phones, including one such event Saturday evening when two New York Police Department vehicles are seen driving straight into a crowd of protesters.

Video of the incident was captured by several Twitter users, posted below. One NYPD vehicle is seen parked directly in front of a metal barricade while protesters stand on the other side of it, and eventually pick it up and move it about a foot or so forward, closer to the front bumper of the NYPD car.

Some protesters start throwing objects — to be fair, it appears from the video that they are mostly litter, plastic water bottles, rubber traffic cones, and other items that do not appear to visibly damage the police car.

Local NYC channel News12 identified the incident as occurring in Brooklyn, and shared other photos and videos of confrontations between police and protesters.