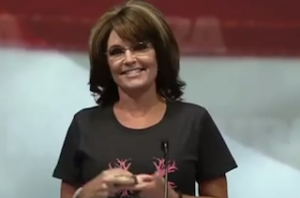 Taking the stage in a t-shirt that read “Women Hunt” in pink lettering, Sarah Palin riled up the crowd at today’s NRA convention in Houston, Texas. Palin spoke for more than 12 minutes about her strong defense of the Second Amendment and other conservative principles. She even attempted to recreate her popular “Big Gulp” moment from her CPAC speech earlier this year by pulling out a tin of chewing tobacco and threatening to “dip” on stage.

Like Michele Bachmann did on the floor of the House last week, Palin quoted her own version of Shakespeare during her speech. As paraphrased from Henry V, “Those who are asleep in their beds,” Palin said, you know who they are, they tend to go by acronyms–CBS, ABC, MSNBC, NYT–one day, they will think themselves accursed that they were not in this fight with us.”

Palin also went after President Obama for “exploiting tragedy” by bringing the Newtown families to Washington in an attempt to pass the Senate gun legislation. At the same time, she accused the president of ignoring a separate tragedy. “We could use a bit more emotion, by the way,” she said, “of what goes on every single day on the streets of cities like Chicago and New York.”

Later in her speech, Palin turned her ire towards Mayor Mike Bloomberg, recalling her “Big Gulp” stunt at CPAC. “Now I see that the mayor of New York now wants to ban public displays of legal tobacco products,” she said, referring to the mayor’s push to keep cigarettes and other tobacco items hidden in stores. Palin then pulled a tin of what appeated to be chewing tobacco out of her pocket and said, “Don’t make me do it.”