Spring Forward? For MSNBC, April Was The Cruelest Month

Spring Forward? For MSNBC, April Was The Cruelest Month 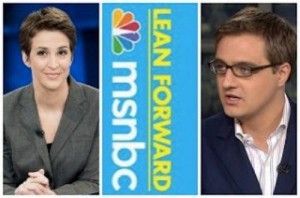 Two months ago, MSNBC President Phil Griffin temporarily morphed into Rex Ryan, the confident coach of the usually-inept New York Jets, winners of one Super Bowl in the past 45 years.

For those who don’t know Rex, he’s famous for his unbridled optimism and bold predictions. His forecast for the season (which usually involve the words “Super” and “Bowl”), much like actual forecasters, has never been noted for its accuracy.

Griffin is in a similar situation as Rex: He’s never won a championship in the ratings race, but that hasn’t prevented him from rallying the 30 Rock troops with bold prognostications of his own, such as his declaration in March of not only challenging mighty FOX News, but actually beating it in the ratings.

And good for him. In the words of another NBC guy, “You have to think anyway, so why not think big?” – Donald Trump

At the time of said prediction, I wondered aloud if Griffin had the horses to make a run for the roses, all while cautioning him to be more wary of CNN/HLN than attempting to make Roger Alies sweat.

That’s not to say Griffin was off-base before making the declaration: Very early in the year, Rachel Maddow beat Sean Hannity a few times (in the key 25-54 demo advertisers target, anyway). Lawrence O’Donnell had passed Greta Van Susteren on occasion as well. But the rest of the lineup? Not even on the same track from a ratings perspective…

Then there’s the timing for such optimism. MSNBC’s slogan used to be The Place for Politics. No argument here…the network eats and breathes all-things-DC. But remember, this isn’t an election year; mid-terms aren’t until November 2014. In terms of Griffin having the wind at his back, an-off-year like 2013 isn’t a game-changing 12 months for any cable news network.

Unless, of course, some big non-political event occurs like:

Enter “C” in the form of the Boston terror attacks and subsequent manhunt. Arguably the biggest hard news story since 9/11. And from a media perspective, a story well outside the MSNBC’s sweet spot of advocacy and/or opinion journalism.

So while CNN and FOX made a well-documented mistake around reporting an arrest that never happened two days after the attack, viewers—already used to seeing errors via the Wild West that is Twitter and Reddit—didn’t seem to care. FOX has Shep Smith, CNN has Anderson Cooper, both extremely capable and respected. MSNBC has…well…the mothership NBC News, who ended up siphoning away an already-dwindling MSNBC audience as the story grew throughout the week (with Pete Williams eventually emerging as the most trusted reporter in the country in the eyes of many).

And after the suspects were killed and captured, respectively, and the story ended its five-day run, a curious thing has happened: Those who left MSNBC to get their hard news elsewhere haven’t exactly flocked back yet.

In April, FOX easily held on to its #1 spot and beat CNN and MSNBC combined. CNN saw significant gains (up a whopping 127 percent). But MSNBC somehow lost viewers during a month (the last half, anyway) when the country was glued to their television sets. Since the bombing story started subsiding, MSNBC has invariably finished in the lower half of the four-horse cable news race, including fourth in the prime time demo Monday through Thursday of this past week.

Another factor in MSNBC’s ratings reversal may be attributed to Griffin’s decision to replace Ed Schultz, 59 with Chris Hayes, 34, at 8:00 PM…all in an effort to draw younger viewers. But after one month, All In with Chris Hayes is down 18 percent from The Ed Show‘s audience for the same month last year. As for enticing those younger viewers, Hayes finished last in the demo in April.

Those who follow cable news argue that MSNBC and Hayes will be on more solid footing once the Jodi Arias trial is over. HLN has gone all-in on Arias, owns coverage of the proceedings completely. And it has paid off nicely, as the network continues to put up steady, respectable numbers every evening.

But after the Arias ruling is handed down, then what? Back to fourth place? Not quite…as the Trayvon Martin/George Zimmerman trial is scheduled to begin early next month, thereby providing a nice bridge for HLN post-Arias.

So what should MSNBC do about the Hayes problem at 8:00 PM? No one, not even Griffin, could have expected him to seriously challenge Bill O’Reilly given The Factor’s track record over the past 13 years (O’Reilly currently draws 5-6 times more viewers than Hayes). But if it’s just a race to the silver medal, Griffin wouldn’t dare dump Hayes after one disappointing month and therefore will allow the show to evolve despite audience numbers falling week-to-week.

But All In still needs major tweaks if it hopes to turn things around, so here’s an idea (and it may sound strange in such a polarized world): Why not add another 34-year-old to the set in the form of S.E. Cupp?

Cupp, one of the few conservatives in Griffin’s stable, is a star. She has presence, prepares well, can fence anyone, has the ability to keep it light when needed, and owns a unique look. You could see it going back to her days as a regular on Greg Gutfeld’s Red Eye, an irreverent panel program that broadcasts at 3:00 AM that boasts a demo audience on par with Hayes.

Few would argue All In needs a jolt, and adding a female conservative to an all-liberal primetime lineup might just be the defibrillator the network needs (without resorting to a more drastic, expensive measure, such as bringing back Keith Olbermann…but that’s a column for another time).

HLN has found a niche in becoming Court TV 2.0.

And unless changes are made starting with its 8:00 PM offering, 2014—and all the races that come with it—won’t nearly come fast enough.