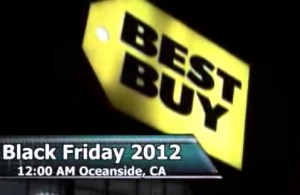 Whether you’re a member of the cell-phone-rioting throngs, or pointing and laughing at them, this clip unites everyone in annoyance at a self-satisfied heckler who videotapes himself haranguing stupid “zombie” Best Buy customers who are nowhere near as smart as he is.

The videographer, Mark Dice, employs some impressively corporate-looking graphics for a guy with such a guerrilla vibe, and he seems to think he’s on the cutting edge of a critique that the Peanuts comic strip went over decades ago, but that’s not the funny part. I don’t want to ruin the punchline for you, so just check it out:

That’s right, those poor, dumb saps on the Best Buy line are missing the really important, smarty-smart stuff, the Bilderberg Group, and should be hoarding gold and silver, not DVDs. I guess Blu-Ray hasn’t hit Dice’s radar yet.

The best part is that the guy turned out not to be an über-obnoxious liberal, or really even a conservative, but a fringe conspiracy right-winger that almost everyone can feel superior to. Let’s all give thanks to Mark Dice for making us like those people on that Best Buy line, and for giving all of us someone to feel superior to this holiday season.