Watch: Trump Joked with Howard Stern About Putting Statue of Melania at Ground Zero on 1st Anniversary of 9/11
SACRED

Watch: Trump Joked with Howard Stern About Putting Statue of Melania at Ground Zero on 1st Anniversary of 9/11 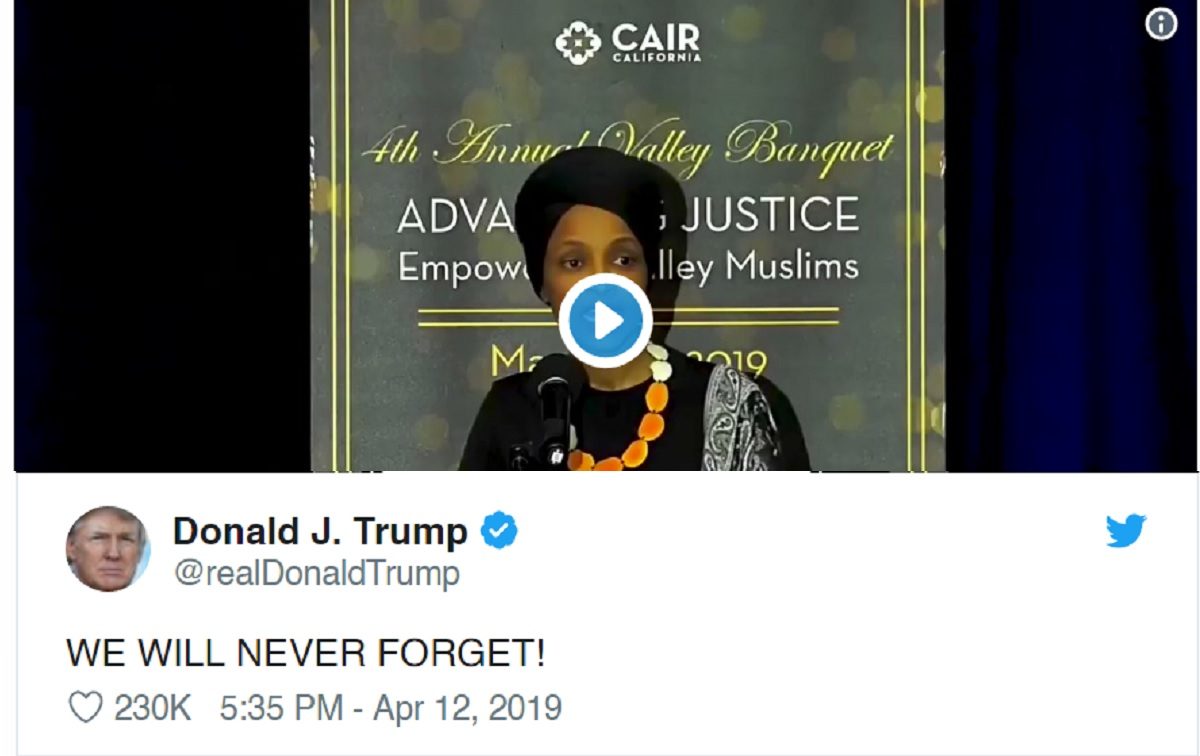 Donald Trump is under fire for posting an inflammatory video of Rep. Ilhan Omar‘s (D-MI) recent remarks about discrimination against American Muslims in the wake of the 9/11 attacks, but the controversy has brought renewed scrutiny of another former Democrat’s remarks about the tragedy.

During a March 23, 2019 speech at the CAIR-LA 4th Annual Valley Banquet, Rep. Omar spoke about the discrimination and violence that Muslims in America and elsewhere have faced, and remarked that “CAIR was founded after 9/11 because they recognized that some people did something, and that all of us were starting to lose access to our civil liberties.”

Trump’s video isolated the remark, and interspersed it with clips of the attacks in progress. Since then, he has faced criticism for “willfully endangering” the life of Rep. Omar, although he was just one of several Republicans to launch inflammatory attacks against her.

But the controversy has also cause people online to circulate another former Democrat’s history of remarks about the terrorist attacks. That former Democrat is Donald Trump, who registered as a Democrat in August of 2001, and switched to Republican in September of 2009.

The most well-known example is Trump’s remarks on September 11, 2001, hours after the towers collapsed, falsely bragging to a television interviewer that he now owns the tallest building in downtown Manhattan.

But fewer people know how Trump celebrated the first anniversary of the attacks, which he spent joking with Howard Stern about how a statue of then-girlfriend Melania might make a fitting memorial at the site of the tragedy.

At the beginning of the interview, Stern and Trump bantered about where Melania was (in bed, Trump said) and whether she was naked (Trump thought so, but he wasn’t sure).

Later, they discussed what should replace the stricken Twin Towers at the World Trade Center site.

“Maybe we should build a television tower there,” Trump suggested.

“Believe me, a statue of your girlfriend would be perfect right there,” Stern quipped.

“Well, that would be an idea,” an amused Trump replied.

Stern and co-host Robin Quivers joked that no one would fly into a statue of Melania.

As the group laughed at that idea, a Stern intern added: “I’d like to fly into that!”

And during his presidential campaign, Trump waged a relentless campaign against Muslims, including his now-infamous claim to have seen “thousands and thousands” of people from “areas with large Arab populations” in New Jersey cheering when the Twin Towers were destroyed on 9/11, an utterly false claim:

Trump also has a habit of using the attacks of 9/11 as a way to brag about his own television ratings, as he did in a 2016 campaign speech in Iowa.

“‘Face the Nation’ put out a release last week that they had, their interview with Donald Trump, long interview, from Florida, that it was the highest-rated show they’ve had in 15 or 16 years, since the fall of the World Trade Center,” Trump told the crowd. “Highest-rated show!”

The press release did not, in fact, reference the attacks of 9/11.

Or when he told another crowd, in Myrtle Beach, the same factoid, and asked “Do you know the power that gives me?”

None of the Republicans who have attacked Omar have remarked on Trump’s history of comments about 9/11.