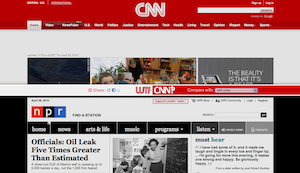 About five years ago, my homepage when I turned on my internet browser was CNN.com. However, I began to notice a disturbing trend as more and more headlines were about celebrity gossip and other “news”. Soon, I had to change my homepage and that was that. Some programmers, however, have decided to do more than just stop going to CNN.com. They’ve now created a website to show just how low the online presence of the “most trusted name in news” has fallen. The creators of WTF CNN didn’t write an angry screed or create a clever video. Instead, they’ve made the simplest criticism ever, by letting the website speak for itself, side by side with other news sites and, guess what, CNN.com doesn’t look that good.

The way the site works is simple. You go to the main page and you’re greeted by a short letter.

“We deserve better than this.

If you’ve ever been frustrated by what headlines the CNN.com front page, this is the site for you. Compare their front page at any given time to that of Al-Jazeera English (or a host of other mainstream news websites).

We know you think this is what we want, but it’s not. We don’t care what random Tweeters think about a news story, how many holograms you have in your Situation Room, or even the latest celebrity gossip.

We care about our world. Instead of using your resources to do the journalism that gives us a better understanding of this world — we get the front page of CNN.com.

Why do we have to look enviously at the front page of Al-Jazeera English for a better sampling of important news stories at any given time? If the CNN frontpage is a reflection of consumer demand, are we to believe that their readers demand real journalism?

Consider this a gentle nudge from the anonymous Internet, CNN.

After you click off the letter, you’re see two windows on the screen. The first one shows CNN.com in real time and the second shows a foreign news outlet of your choice. The foreign sites include the BBC, Al-Jazeera, NPR, and Reuters.

Since WTF CNN shows the CNN front page exactly as it is, the evidence against CNN is more or less damning depending on when you sign on. Usually, though, it’s pretty bad. When I signed on, one of the headlines promised a list of the worst movie remakes of all time (That’s right, CNN! You take the Steve Martin version of The Pink Panther down a notch!) while another one featured a “Marimba-playing robot”. Shockingly, the BBC wasn’t carrying either of those stories.

The website was created by Alexis Ohanian of Breadpig and a programmer who goes by Chromakode. In a post on Breadpig, Ohanian had this to say about his new project:

“We basically got tired of seeing the vast difference between quality of content on the CNN.com frontpage and the frontpage of AlJazeera.net. Granted, the disparity provides regular content for redditors.

And while it’s amusing to see CNN appear to try and out-Fark Fark (without the clever headlines) it’s disheartening to think this is the frontpage of ‘news’ the USA is subjected to.”

There will always be room for off-beat news stories. Hell, whenever Mediaite has one, I’m usually the guy asked to write them. However, they probably shouldn’t be getting equal billing on the CNN home page as the story of the giant oil leak in the Gulf of Mexico. Look, I love CNN. I love the fact that they still try to be unbiased in a world dominated by MSNBC and Fox News. But, if they really want to be the well-respected place for news, their website should reflect that.