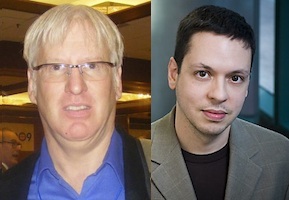 One gut-wrenching by-product of the pursuit of the Weinergate story is the degree to which the safety and privacy of underage girls have been compromised, by those on the right and the left. Both right-wing blogger Jim Hoft and left-wing blogger Markos Moulitsas defiantly refused calls to redact the identities of underage girls, and conservative activist Dan Wolfe‘s crusade against Weiner brought one 16 year-old girl into contact with Mike Stack, a man with a troubling history.

Right-wing blogger Jim Hoft, also known as Gateway Pundit, posted a list of young, female, mutual follows with Rep. Anthony Weiner’s Twitter feed several days ago, ostensibly to express “concern” over the pattern, but his description of “Pages of Young Luscious Fans,” and his presentation of large photos of the girls, made it seem more like an exercise in exploitation. His inclusion of the young women’s Twitter links seemed more like an invitation to harassment. Whatever alleged “news value” this information had could have been preserved with a more responsible presentation, but sex sells, right?

At least one of the girls (Hoft doesn’t say whether he bothered to check the others) was an underage girl who had already been harassed off of Twitter by the same clique that first “discovered” the controversial tweet from Rep. Weiner last Friday night. Hoft acknowledges this, but still splashes the 17 year-old’s photo and Twitter id all over his page. Remeber, “luscious” is his description.

When I objected via Twitter, and called for the information to be treated responsibly or removed, Hoft responded by calling me a crank, and posting a yellow insinuation about Rep. Weiner:

(@TommyXtopher) How about it? Any decent #tcot think Jim Hoft @gatewaypundit should take down his jailbait gallery? Anybody? Bueller?

Apparently, Hoft also tried to juke his traffic by embedding a link to this post in a story he wrote for Andrew Breitbart‘s Big Government. While he is ultimately responsible for the link’s appearance in the first place, Breitbart, to his credit, immediately removed the link once I emailed him about it.

That wasn’t the case, unfortunately, with Daily Kos founder Markos Moulitsas, whose blog published a photo that revealed the identities of two 16 year-old girls who had been contacted by the Dan Wolfe crew. Again, he could be forgiven not knowing everything that’s published on his blog, but once informed, he refused to redact the information. In comments to The Daily Caller, he tried to pass this off as a pure matter of policy:

“We’ll remove copyright violations when we get a DMCA takedown notice,” Moulitsas said in an email. “We’ll remove any direct calls to violence (I can count the instances in one hand). That’s it. If anything else has been removed, it has been removed by the diarists themselves.”

Open to a counter argument that has nothing to do with protecting your source.

The fact that these 16 year-old girls had already suffered harassment, were terrified, and that their parents were threatening legal action weren’t enough to overcome what appears to have been Moulitsas’ primary objection: “As I understand it, those two individuals injected themselves into a political smear effort, why should they be protected now?”

If that sounds a lot like “F*** ’em, they deserve what they get,” to you, that’s because that’s what it sounds like. Just as Hoft’s zeal to assassinate Weiner’s character caused him to behave recklessly, so did Moulitsas’ desire to punish those whom he sees as political opponents. You can view the balance of our email exchange here.

Eventually, I was able to contact the original author of the Kos piece (through a Twitter friend), and he immediately agreed to redact the photo in question.

Both Hoft and Moulitsas clearly demonstrate a major pitfall of the new media, their sometimes loose grasp of journalistic ethics:

— Show compassion for those who may be affected adversely by news coverage. Use special sensitivity when dealing with children and inexperienced sources or subjects.

Then, there’s the matter of non-journalistic crusader Dan Wolfe (aka PatriotUSA76), who, along with his Twitter clique, harassed these young girls for what appear, now, to be completely innocent Twitter friendships with Rep. Weiner. They disguised their harassment in the cloak of “concern,” but they derided these girls, copied them on filthy suggestions about the congressman, and forced three of them off of Twitter.

Their supposed concern for children is belied by the remainder of their Twitter streams, a=n unrelenting stream of invective and innuendo about Rep. Weiner, with nary an unrelated reference to protecting children. Their zeal to destroy Weiner brought one of these girls into private contact with a man named Mike Stack (@Goatsred).

Stack is the man who approached my source, “Veronica (a pseudonym, to protect her identity),” via Twitter Direct Message to try and obtain information about Rep. Weiner. This contact produced only false information that was never used, but this contact, and his attempted contact with Veronica’s friend “Betty,” horrified these girls’ parents. If they only knew.

This is the man who managed to come in contact with 16 year-old Veronica, and tried to contact her friend Betty. For one so concerned, Stack doesn’t appear to have tried to contact the authorities about his concerns, or seek permission from either girl’s parents to speak to them.

Given this information, I wonder what Wolfe’s clique thinks of their judgment now, in using these young girls as pawns against a political opponent? If you grant them the benefit of the doubt that they really were just concerned, but misguided, is ganging up on these girls, and introducing them to people like Mike Stack, really an exercise in responsible advocacy?

These incidents illustrate, in bright colors, what can happen when zeal to get a piece of the media action overtakes good judgment. So far, the outcome for these girls is not nearly as bad as it could have been, but what will happen next time? There’s no indication that any of the adults involved here have learned their lesson.