What Makes Good Gay Journalism? And Why Is There So Little Of It?

What Makes Good Gay Journalism? And Why Is There So Little Of It? 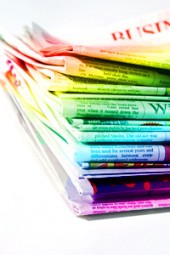 A couple months ago, someone, wondering aloud, asked me if maybe gay rights would be the new issue that marks the time and generation we’re in. I didn’t so much as wonder aloud in reply as I did shout: “You mean that after the civil rights movement, you think the gay rights movement is next? I would say they two are the same.”

And I still think that. But it’s not necessarily true when we start talking about the logistics of the gay rights movement. Can you imagine Soledad O’Brien looking sternly into the camera and saying, “Thank you for joining us for a CNN Special Presentation: Gay in America”? Maybe, but I also imagine there would be many more crude (and especially) dirty jokes about it the next day – even on the best and biggest gay blogs themselves. There’s a seriousness the media has when it talks about issues of race that is equivocal and ambiguous with gay rights issues. In scouring all the “top, best, most” lists of journalistic news articles, I couldn’t find a single article about gay rights or even marriage equality.

That may be changing. On October 2nd, the New York Times published a piece called “The High Price of Being a Gay Couple,” by Tara Siegel Bernard and Ron Lieber (still #2 most e-mailed in the “Your Money” section). Unlike so many of the articles I read everyday about issues facing the gay community, this one established a way of looking at the topic that renders it serious, without having to explain, qualify, or prove it. The reporters had a basic question in mind: what is the lifetime cost of being gay? They did an exhaustive amount of research to find answers. It’s one of the best pieces about gay rights I seen specifically because it roots the discussion in something more concrete. A quality that is not often celebrated in gay journalism.

Each year, there are two major types gay media awards given out: the GLAAD Media Awards and the National Lesbian & Gay Journalists Association Awards. The two organizations have different criteria (NLGJA’s are a little broader), but they both aspire to recognize the most important gay journalism of the year. Allow me to list the titles of some of the nominated and winning pieces: “A Personal Journey of Self-Discovery,” “Ellen & Portia’s Wedding Day,” “Harrowing Incident a Troubling Reminder of Homophobia.”

Now let me be clear: I think these awards do a great service (I help organize this year’s 20th Annual GLAAD Media Awards in New York!). And absolutely, there are some pieces of journalism that hit their mark. But we still give awards to people who tell their story instead of give us numbers, people who use emotion instead of facts. Maybe the flaw is in the award criteria: we no longer need happy and sappy portrayals of gays in the media to allow people to get comfortable with the culture, so much as we need essential bedrocks for discussing our rights. This is where the recent New York Times piece sets itself apart. It provides us, all of us, wherever we fall on the sides of the debate, with a serious tone to talk about the issues.

The current definition of what constitutes “good” gay journalism is not serious in the sense that it does not render the issue in a way to make progress. In the mid-to-late 1990s the sad stories about a tragic coming out did so much to educate, but the gay community needs people to actually write some laws now! A famous gay athlete telling his story does almost nothing next to a piece that tells us, in exact dollars and cents (sense), how much more it costs to be a gay couple than a heterosexual couple. One tugs at our heart-strings and one gives us something to say on the floor of Congress.

It might be a larger trend today that in an age of Twitter, personal blogs, and fast reporting, that we have to give kudos to just about anyone who actually takes the time to sit down and think deeply about the issue. But the notion that getting any kind of gay representation in media coverage might not be exactly what we need. We need more Tara Siegel Bernards and Ron Liebers out there if the goal is to make equal media representation become equal civic representation.