What Sarah Palin Is ‘Absorbing’ From Newsmax

What Sarah Palin Is ‘Absorbing’ From Newsmax 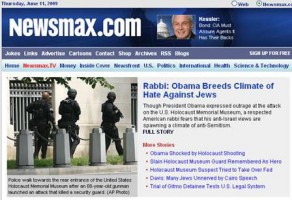 The secret is out now. As Keith Olbermann points out, it only took Sarah Palin a year and six weeks to name 3 news sources that she reads, and at the top of her very short list sits Newsmax.com. While much has been made of the current White House’s attitude toward Fox News, it makes you wonder what a Newsmax-guided Palin Presidency would be like.

Here’s the clip of Palin giving Sean Hannity the answer to Couric’s question:

First off, I can’t understand how any interviewer can let Palin get away with the excuse that Couric’s question was somehow an insult to Alaska. By that logic, Mediaite has insulted the hometowns of dozens of media figures.

I have suspected all along that Palin second-guessed whatever answers she wanted to give, correctly assuming that no matter what she said, people were going to make hay. That’s still a weak excuse, but a believable one. The fact that her year-plus deliberation produced Newsmax as her number one answer, though, surprises even me.

I first became aware of Newsmax early in the 2008 Presidential campaign. Several of my Political Machine colleagues and I were tasked with fact-checking smears against the candidates, and I drew Hillary Clinton. The smear in question had to do with Hillary’s alleged dirty mouth, but more seriously, her alleged use of racial and religious slurs.

I traced the smear to an article that used two sources. One of them was a book that doesn’t exist. The other: Newsmax. (I note with particular pride that the article has since been updated to call me a foaming at the mouth, Clintonista asshole.) The sources Newsmax quoted were all heavily compromised in some way, so much so that no other publication ever ran the quotes.

Since then, Newsmax has done little to distinguish itself from that nonexistent book. Aside from the right-wing slant evident from a quick scan of their front page, they have also published columns that blamed Barack Obama for the Holocaust Museum shooting, advocated a (bloodless) military coup, speculated about the President’s birth certificate, and suggested poison gas (“figuratively, but in a very real way”) to remove the current occupants.

Does this mean that Palin harbors birther delusions and Obama fumigation fantasies? I doubt it, mainly because I doubt that Sarah Palin actually reads Newsmax. I read a lot of online news and blogs, including conservative sites like Redstate and Hot Air, and apart from that article I did for Political Machine, I’ve never seen Newsmax cited as a source. They simply aren’t taken seriously.

Except, of course, by a large segment of Palin’s fans, which explains why she answered as she did. A true cynic might posit that Palin, even after all this time, was still just answering off the top of her head, and replied with the name of the last conservative publication to have interviewed her that day. I give Palin more credit than that.

I think it’s much more likely that this was an appeal to the base, and probably the same answer that a lot of Republicans would have given in this situation. Newsmax is one of those things you have to say you like if you’re a Republican. It appeals to the base, but isn’t quite as loony as WorldNetDaily. Still, I think Palin would have been better served had she cited a more mainstream news source, then thrown in a few well-respected blogs like Hot Air to pull the fans.

Of course, it is possible that Palin really does head for Newsmax first thing every morning. I just think she’s smarter than that.