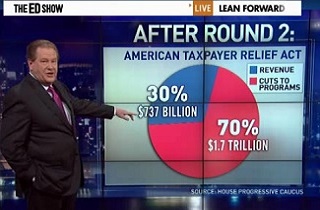 Hey, remember back when liberals mercilessly mocked Glenn Beck over his hysterical admonitions to buy gold? Or when we relentlessly pushed back against the Republicans’ misguided focus on debt and deficits, when we should be spending on jobs programs? Those were the days. While he and other liberal radio hosts have  advertised gold for some time, progressive broadcasting powerhouse Ed Schultz has cut an ad for ITM Trading that almost makes Beck’s pitch sound like a soothing lullaby, calling the U.S. debt the “Titanic,” and gold the “lifeboat.”

Before you even start, fellow liberals, there is no one who has more admiration and affection for Ed Schultz than I do, and I realize that Ed’s sponsor is not the equivalent of Beck’s Goldline, which settled a 19-count fraud case in 2012. I also realize that in some cases, hosts don’t have all that much control over who their advertisers are, and that gold purveyors have as much of a right to advertise as anyone else. Conversely, liberal hosts also have the right to advertise gold without necessarily being in Beck’s category.

My objection, here, is to the fear-mongering tone of the ad, and its divergence from Ed’s own stated beliefs about the debt and deficit. Here’s the ad, with helpful transcription by Newsbusters:

Ed Schultz for ITM Trading here. In the United States Congress, Republicans and conservatives want all the chairs to be red on the right. Democrats and liberals want all the chairs to be blue on the left. Some call for bipartisan purple chairs in the center just for show. The trouble is, all of the chairs are on the deck of the Titanic and it’s going down. Sixteen trillion dollars of national debt is a hole that may never be fixed, yet Congress continues to squabble over the arrangement of the chairs on a sinking ship. Our country takes on $1.7 billion of new debt every day. Can it ever be repayed (sic)? Never?

Well, thanks a load, Ed, I guess I’ll take all that money I’m wasting on heart medication, and get me some gold, since that ad just gave me a heart attack anyway!

If the whole thing is a sham, and we’re really just rearranging the deck chairs on the Titanic (note also my objection to that tired metaphor; I would have at least gone with the Kobayashi Maru), then what was Ed doing here, promoting the House Progressive Caucus’ deficit reduction plan?

People who love Ed Schultz love him because they believe in him, but his over-the-top pitch for doubloons is not change we can believe in.