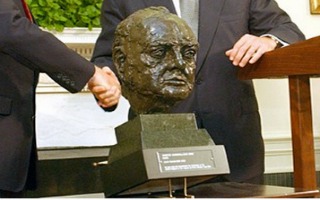 On Friday, a spokesperson for the White House took on Washington Post columnist Charles Krauthammer for reprinting what he called a “ridiculous” and “patently false” rumor that President Barack Obama returned a bust of former British Prime Minister Winston Churchill to the British Embassy soon after his inauguration. But the White House’s spokesperson is at odds with a statement provided to the press by a British Embassy spokesperson in 2009 in which they confirmed that the embassy was again in possession of the bust.

In a piece in the Washington Post on Friday, Krauthammer wrote that “Obama started his presidency by returning to the British Embassy the bust of Winston Churchill that had graced the Oval Office.”

That sentence did not sit well with the Obama White House.

Now, normally we wouldn’t address a rumor that’s so patently false, but just this morning the Washington Post’s Charles Krauthammer repeated this ridiculous claim in his column. He said President Obama “started his Presidency by returning to the British Embassy the bust of Winston Churchill that had graced the Oval Office.”

This is 100% false. The bust still in the White House. In the Residence. Outside the Treaty Room.

Pfeiffer goes on to cite two reports from media outlets that describe the position of the bust of Churchill in the White House residency. He also posted a picture dated July 20, 2010 in which President Obama and U.K. Prime Minster David Cameron are viewing the bust in the White House. 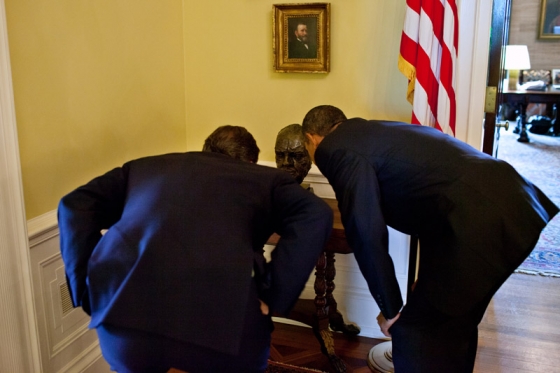 There appears to be little discrepancy that the bust of Churchill does occupy the White House residency and has done so since at least 2010. However, there is some confusion as to why it was widely reported that the bust was ever removed – the confusion stems from a confirmation from the British Embassy in Washington D.C. that they had received the returned bust.

In February 2009, an unnamed British Embassy spokesperson provided the U.K. Telegraph’s Tim Shipman with the following quote about the return of the bust:

”The bust of Sir Winston Churchill by Sir Jacob Epstein was uniquely lent to a foreign head of state, President George W Bush, from the Government Art Collection in the wake of 9/11 as a signal of the strong transatlantic relationship.

“It was lent for the first term of office of President Bush. When the President was elected for his second and final term, the loan was extended until January 2009.

“The new President has decided not to continue this loan and the bust has now been returned. It is on display at the Ambassador’s Residence.”

Mediaite reached out to the British Embassy for comment but they have not yet provided us with a clarification.

UPDATE: The British Embassy confirms that Krauthammer was correct.