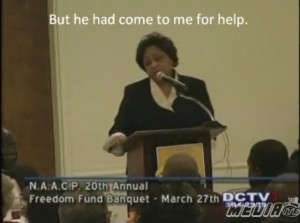 Former USDA official Shirley Sherrod has gone from racial villain to inspiration overnight, but the emerging context to the remarks that got her fired yesterday seem to make little or no difference to Secretary of Agriculture Tom Vilsack. Despite the fact that Sherrod explained to her superiors that the full speech exonerated her of what was suggested in the edited clip, Vilsack stands by the firing. Additionally, a White House official tells Mediaite that this decision was Vilsack’s alone.

Yesterday, I asked for and accepted Ms. Sherrod’s resignation for two reasons. First, for the past 18 months, we have been working to turn the page on the sordid civil rights record at USDA and this controversy could make it more difficult to move forward on correcting injustices. Second, state rural development directors make many decisions and are often called to use their discretion. The controversy surrounding her comments would create situations where her decisions, rightly or wrongly, would be called into question making it difficult for her to bring jobs to Georgia.

Contrary to what some are reporting, the White House was not involved in Sherrod’s dismissal. A White house official told Mediaite “We did not pressure her to resign. It was the Secretary’s decision.”