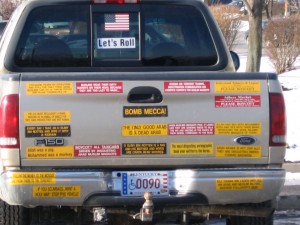 A Reddit user has posted a pretty amazing picture which he or she has entitled, simply, “Hatred.” The picture is of a truck which boasts, not one, but 18 of the most offensive, anti-Muslim bumper stickers you’re gonna see. Clearly calling Muslims “disgusting maggots” makes this driver feel like a tough guy. However, he’s driving a Ford F-150 and, as Howie Long, manliest man ever will tell you, that means he’s a total girlie man.

Really though, none of us are surprised at this point that there are people out there who have a slightly unhealthy relationship with Islam (heck, some Muslims have an unhealthy relationship with Islam). However, what fascinates me about this photo is imagining the small, cottage industry that produces racist bumper stickers. Do you think there’s some guy in an office somewhere struggling to come up with these? And did he get super psyched when he realized he could rhyme “Osama bin Laden” with “O Slimy bin Rotten?” Like, was that the point in his day where he went, “Oh man, I can pack up shop now. I totally burned him with this one. If Osama knew I turned his last name into ‘Rotten,’ I bet he’d really start hating America.”

The whole thing is just really depressing. It’s so depressing that I need something to cheer me up. Oh, I know! How about this picture that I took while stuck on the New Jersey Turnpike a couple weeks ago. It’s of a truck with 12 bumper stickers all about poodles! What kind of person loves poodles this much? You know, I used to think only a crazy person would have 12 poodle bumper stickers but, after seeing this new picture, I’d rather hang out with Poodle Person any day of the week.

I mean, at least they don’t have a man-step! Ooh, Howie Long Burn!