Whoopi Goldberg Issues a Ruling on What to Call Black People 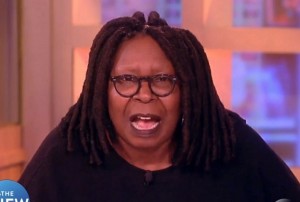 It is a question that has perplexed white people for decades, but has now been settled for good and all by actress, comedian, and The View host Whoopi Goldberg: what do you call black people? During a discussion of this weekend’s more-diverse-than-the-Oscars SAG Awards, co-host Sarah Haines cut in to ask for “a clarification.”

“I’ve heard that you don’t say the term African-American, you just call people black now,” Haines innocently declared, from the mid-nineties, apparently. Goldberg then weighed in with an impassioned plea to call black people “Americans,” because to do otherwise is to diminish their American-ness.

“So I should just call you black?” Haines concluded, which elicited a priceless response from Whoopi

Behar: Listen, white people can’t keep up with this.

Goldberg: I can’t keep up with it either. I went from being colored to being a negro to being black to African-American. I figured I would land on American. And you know what, save your tweets. Save your tweets because here’s the deal, here’s the deal. People get all up in arms. I know I’m black. I’ve been black from the moment I was born. I’m very clear about it.

Goldberg: They’re very upset. They say “You just don’t want to be black.” No, it’s not something you can change. I am black, but I, as an American, you don’t really call lots of white folks white Americans. You don’t call them that. you don’t call them Italian-Americans, you don’t do that.

Bure: Some people still do.

Goldberg: Some people do it but it’s not how you’re addressed. I don’t address you as an Italian-American.

Paula Faris: I’m half Lebanese. I don’t consider myself Arab-American. I have Arab roots.

Goldberg: I’m the same way. Any time you hyphenate American, any time you put something in front of it, it’s like you’re not a real American. Well I’m a whole lot of all-American. This is my country and I’m an American. Save your tweets and save your hate mail because you know in this case I don’t care.

Haines: So I should just call you black?

Goldberg: You should just call me Whoopi.

Haines: And sometimes I get that wrong.

Goldberg: Oh, my god, wait, wait, wait. Did you hear what she said. And sometimes I even get that wrong. Last week, she got all excited and she called me Oprah.

Haines: I felt like I was at a dinner table being like, mom, mom, trying to get her attention and for some reason Oprah came out.

Whatever you think of Whoopi’s logic, there’s one clear moral to this episode, one which has escaped the aggrieved lot who constantly complain about not knowing what to call people in this “politically correct” age. Unless you have a really compelling reason not to, just call people whatever they prefer to be called. Or “Oprah,” that works too.