Why Do We Have To Mention His Name?

Why Do We Have To Mention His Name? 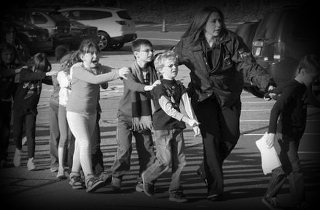 A plea to all network execs, producers, anchors and reporters:

Don’t even mention his name.

Don’t even show his picture.

Don’t give this guy the celebrity he may have so pathetically sought.

This mass murderer of children and teachers can’t be given the same blaze of glory that Eric Harris and Dylan Klebold got out of the Columbine massacre 13 years ago.

You know what’s sad? I didn’t even have to Google their names. I heard them so many times on television they’re now etched in memory.

Infamy is exactly what the Connecticut killer wanted. And now, whether you like it or not, he’s likely to get it…

You know the drill. There will be an outpouring of grief by the nation. This grief will seem even more pronounced with the ability to see everyone’s feelings on your Facebook or Twitter page. It’s literally the only thing anyone is talking about on social media. Most of it is heartfelt and poignant: Shock, sorrow, anger…

In a few days, the wall-to-wall media coverage will move on to funeral services. The emotion will get stronger.

But by then, most of you will move on. And not because you’re uncaring, apathetic, but because it’s too depressing to bear.

Maybe you have kids, nieces, nephews. Maybe you’re a teacher yourself. Maybe you’re just human and can’t think about what it must have been like for those small children to witness their classmates getting mowed down by an insidious monster before lying in a pool of blood themselves, not knowing why any of it was happening.

In my lifetime, I can’t think of a more evil image than that. It brings me to tears just thinking about it.

After tears comes anger. Like many of you, I wish this coward didn’t get off so easily with instantaneous death. Instead, getting shot in the junk would have been an appropriate start to his end, followed by castration (for medical purposes, of course), followed by a long prison stay without special protection as he waits for trial.

Upon being beaten within an inch of his life (while getting to know the reality version of The Sistas from The Shawshank Redemption), he is sentenced. Whether it be a death sentence or a life of solitary confinement in a cell that never sees sunlight, no fate is brutal enough.

Getting back to the way this will shake out on your television, the race for an interview with parents of the victims will be hypercompetitive. But if you’re like me, you won’t be able to watch even one second. It’s too much to absorb, along with the fear that this could happen to a child you love, too. It’s almost better to ignore this kind of interview, simply for sanity sake.

From the start, anyone remotely affiliated with the shooter will see a microphone stuck in their face, too. Being that his brother, Ryan (first believed to be the shooter), lives exactly four blocks from me in Hoboken, NJ, I’ve already witnessed every neighbor within a three block radius being interviewed while it was still believed Ryan, not Adam, was the suspect. Whoops.

The media, of course, turned to Facebook to find Ryan, and many of the major media entities, including this site, posted Ryan’s Facebook profile photo. NBC News reported Ryan’s link to Hoboken. News crews assembled down the block from me, helicopters swirled overhead. Turned out they had the right last name, wrong guy.

Lastly, there will be what cable news does best: the blame game. And it will be the usual over-the-top crap disguised as “debate” on cable news (See: two guys yelling at each other while the anchor takes a side, depending on network).

The NRA will be the predictable target, followed by Republicans (even though many Democrats also support the organization). Michael Moore (“Bowling for Columbine”) will be the go-to guest, followed by whoever is the spokesperson for the NRA these days. Even President Obama, who hasn’t passed any meaningful laws around gun control in his first term (to avoid losing any votes from gun advocates in swing states such as Virginia, Ohio and New Hampshire) will also be thrown into the mix.

Video game makers will also be scrutinized, as will security measures at all schools around the country…as if anything outside of placing an armed guard in the school could have remotely prevented this.

Of course, the plea to avoid glorifying the next killer from central casting will go ignored.

The appetite for this kind of sick stuff is too strong.

20 little kids were executed at an elementary school Friday morning.

I know it may sound like a cliché but I believe it — If the media had any principles outside of profit and sensationalism, his name wouldn’t be said over and over and over enough to remember.