Why Donald Trump’s ‘Law and Order’ Schtick Is a Joke 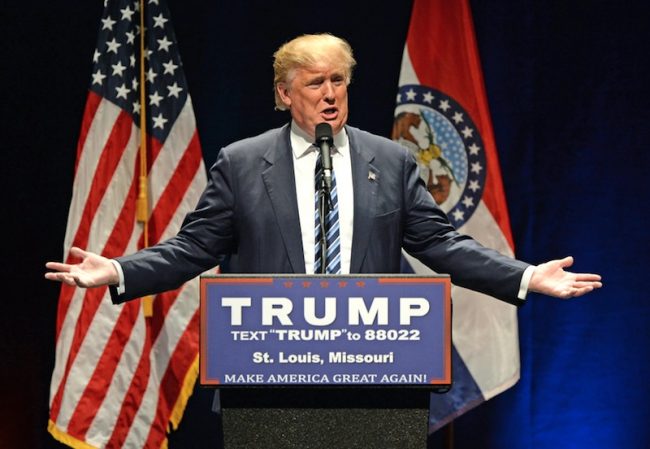 Reporting at the RNC during then-candidate Trump’s speech was a chilling experience.

Although he had foamed at the mouth about being the “law and order” candidate for months, there was something different about the way he said it in Cleveland—more sinister, retro 1930s and 40s Europe.

But, a las, one week into the reality TV presidency, and it’s become crystal clear: President Trump doesn’t give a DAMN about law and order if it harms his big business pals, business interests, or skyscraper-sized ego.

In just five working days in the Oval Office, President Trump issued more than a dozen executive actions, one more extreme than the next.

As Politico noted, the executive orders President Law and Order is rampaging through might not be worth the paper their written on.

That’s right—Trump’s team didn’t bother to consult with federal agency lawyers to confirm that his actions were simpatico with that pesky thing called the law.

In the case of Trump’s attempt to revive the Keystone Pipeline, his White House didn’t consult with State Department officials, which might have been important considering TransCanada, the pipeline builder, has sued the U.S. for $15 billion under the guise of the NAFTA trade deal.

On top of Keystone XL, Trump signed a presidential memorandum—different than an executive order—to essentially try and reverse the Army Corps of Engineers decision to deny a final permit for the Dakota Access Pipeline.

Reading in between the lines of that memorandum, Trump’s essentially trying to toss out the currently in-motion Environmental Impact Study—a study that BY LAW must happen for all major oil pipelines but DAPL’s parent company skated around by portraying the 1,100-mile pipeline as a series of separate, smaller pipelines—and go by the completed Environmental Assessment already done.

Besides being against the law to not do an EIS, ramming DAPL through via the Environmental Assessment is fraudulent: EA’s are done by companies hired by the oil company, so gee gosh jolly Jim, the results are almost always a green light for said oil company to drill baby drill.

And, since the corporate media casually glosses over this fact, it’s my job to remind you: President Trump IS PERSONALLY INVESTED IN THE DAKOTA ACCESS PIPELINE! He has shares in Energy Transfer Partners, the main oil company building the pipeline, as well as Phillips 66, who owns a quarter of the pipeline.

Then there’s Trump’s obsession with torture, which was declared illegal long ago and has only poured more gasoline on the fire that breeds new terrorism. Not only does Trump want to torture those the U.S. suspects of terrorism, but he wants to expand the illegal surveillance state.

As The Intercept reported, Trump’s transition team, which is filled with folks linked to a French defense contractor specializing in “facial recognition and biometric software for law enforcement and intelligence agencies,” is pushing him to expand “facial-recognition technology, and an expansion of ‘verifiable’ identity solutions both in real life and online.”

This is also known as falsely arresting people who might be innocent but have a similar face to someone guilty (while tossing out due process).

If all of this law and order hasn’t captivated you enough, here’s the final whopper: in issuing his executive order to ban refugees from seven Muslim-majority countries under the guise of 9/11, Trump didn’t just choose the countries that had no links to 9/11; he exempted countries that actually have ties to terrorism but his real estate company does business with.

Trump banned refugees from Iran, Syria, Iraq, Libya, Somalia, Sudan and Yemen—none which were linked to a single American being killed over the last 40 years, according to Cato Institute.

But Trump has done business with Saudi Arabia, Egypt, Turkey, and United Arab Emirates—countries that have been linked to terrorism aimed at the U.S.

And somehow, by President Law and Order’s standard, refugees from these countries are A-OK to enter the United States (for the record, I’m against all bans on refugees on humanitarian grounds).

The scariest part of all of this is what we haven’t seen yet—the full scope of Trump’s selective implementation of law and order.

That picture looks to be Trump tossing law and order out the window to ram a pipeline through or torture a terrorist suspect but slamming his fist down when, tragically, the next unarmed black man gets murdered by militarized police, and Trump sends in the National Guard to abuse protesters in the name of “law and order.”

As my viewers know, I was no fan of Hillary Clinton or the corrupt, corporate Democratic establishment. But, let’s be real. If this were Madame President doing any of these things, the pitchforks would be out on the left and the right.

So what do we do?

Embrace that old but true adage: the only way to back down a bully is to fight back.

Not with our fists or weapons, but with our marching legs, voices, signs, and candidates that not only fight against radicalism, but represent real progressive values.

The Women’s March was a good start. Now, let’s make sure Trump’s view outside the White House is obstructed more consistently—with thousands of people outside the gates, demanding the Donald cut it out, or be on the receiving line of the line he loves most in 4 years.