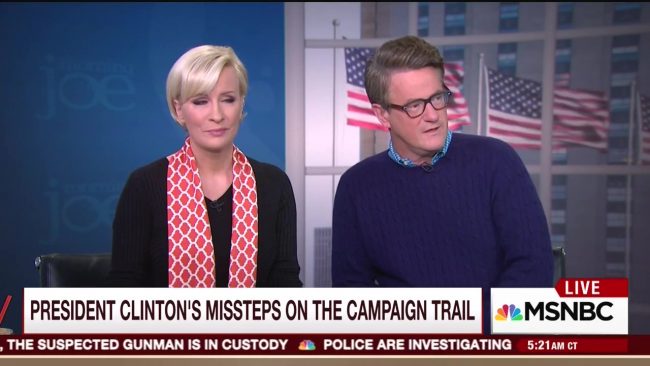 Nearly everyone knows the adage that the definition of insanity is taking the same action over and over again while expecting a different result. This is why I find it so humorous that many in the news media, despite over a year and half of very clear data from which to have learned about how to deal with President Trump, still think that the old political playbook has significant relevance here.

The latest to fall into that trap is MSNBC’s sometimes Trump sycophant/advisor, sometimes critic, Joe Scarborough (of whom I have been very critical in the past for his self-serving promotion of Trump during the GOP primaries). Yesterday, Scarborough warned Trump (directly as possible, since saying something on either Morning Joe or Fox News Channel is now obviously the most efficient way to send the President of the United States a message) that going to war with the press is the “worst strategy” because the “press always wins.”

Normally, I would agree with Scarborough’s assessment. While the news media has rightfully lost a tremendous amount of influence and credibility in the last generation, they can still wield enormous power with a significant segment of the population, at least when they work in unison. However, Joe is making a fundamental miscalculation which, now that we have seen a week of Trump as president, is really rather obvious.

You see, President Trump doesn’t give a damn about the appealing to the people who are swayed by the mainstream news media. More than just that, you can actually make a very strong argument that he (or Steve Bannon, who chillingly wants the media to “keep its mouth shut”) is making a strategically sound decision, at least in the short run, to go in this largely unprecedented direction.

Throughout the modern history of presidential politics, the governing goal/strategy has always been to figure a way to get at least 55% of the general public to at least marginally support you. This would not only assure your reelection but also allow you to control your own party while possibly making inroads with the opposition.

Trump, however, possibly because he rightly realizes that 55% approval is simply not possible for a guy who maxed out at 46% of the vote against a horrible candidate, has clearly decided to focus all of his energies on making sure that he maintains something close to a 40% approval, but with over half of those people devoted to him as if he is a king, or the leader of a cult. This was obviously his approach during both the primary and general elections and his actions/statements since being elected, including his inaugural address and interview with David Muir, have made it abundantly clear he is not changing course now.

In short, we need to stop seeing Trump as a “Republican” president. He is a member of an unofficial “Populist Party” (which accounts for his cult-like following among about 25% of adults) that currently has an alliance with the GOP, which gives him another 15% of people who would be called hard-core doctrinal conservatives. If Trump doesn’t screw up his Supreme Court pick and nothing disastrous happens, that 15%, which is inherently skeptical of the president, will stick with him for the duration of his presidency (this is the principal reason he has gone so far out of his way to pretend to be “pro-life,” when he is obviously not). Meanwhile, as long as Trump remains Trump (meaning he doesn’t lose his big balls) there is almost no way for him to lose his core of 25%.

There are at least two reasons why Trump can be “successful” governing with a minority coalition. The first is that his core 25% (or whatever that number actually is) would, as he accurately stated during the campaign, stick with Trump if he shot someone in broad daylight. Consequently, GOP members of Congress know that they can’t provoke his wrath because they will be attacked, “primaried,” or maybe even lose a general election because Trump’s “people” are the type who would have no issue crossing party lines if Trump instructed them to do so (here is where his Twitter account is a devastating weapon of modern political warfare, the likes of which has never been seen before).

This means that when Trump deals with the GOP in general, he is effectively a suicide bomber who the party knows can destroy them at a moment’s notice because he just doesn’t give a crap about the consequences.

The second reason is, thanks to dramatic political polarization, demographic balkanization, and media fragmentation, the once revered “political middle” has shrunk in both size and power. The reality is that there are very few very competitive House seats for the “middle” to decide anymore. Furthermore, let’s face it, the political middle third of this country is grossly apathetic about politics and totally ignorant of the major news of the day. They aren’t watching cable news and are only getting fragments of headlines, usually told to them by friends and family members.

Unless something really dramatic happens, these people may tell a pollsters that they disapprove of Trump one day and, depending on their mood, flip back the next. Regardless, they don’t feel strongly enough to actually do anything about their muted opinion and therefore, at least until the next presidential election, they are basically meaningless.

As for those who strongly disapprove of Trump, as long as he can keep them below, say, 55% then he doesn’t have to worry about anyone in the GOP bucking him. If he keeps his current base intact, then mathematically, by banking on the apathy of those in the middle, he can’t possibly get himself in real trouble.

Here is where his war with the news media, an “opposition party” even more unpopular than the Democrats, is actually smart. First, most of his supporters understandably despise the news media, so they love seeing them finally get the criticism they deserve (even if it is from a terrible messenger). Second, it inoculates his base against any future bad news because they have been warned/trained to not believe anything negative they hear about him on the “unapproved” news (even when it is video of things he has actually said).

Like any good cult, it is vital that the members be protected from “bad” information from the outside world. Here, much like Scientology, a war to discredit the media and limit the flow of unapproved news is not only a good idea, it is imperative to the cult’s survival. This is where largely now state-run Fox News along with completely state-run Drudge Report, Breitbart.com, and talk radio, serve to create cocoons of safety for ardent Trump supporters.

The mainstream media needs to understand this about that 25% which make up Trump’s true core of support:

Therefore, there are only three ways that Trump can get truly hurt politically: An economic disaster, a major terrorist attack on our soil, or if he loses the conservative media industrial complex (which will never happen as long as the ratings hold out). As you can see, a war with the mainstream media does nothing to facilitate any of these things happening and actually greatly helps keep the third from ever being a possibility.

I have no idea whether it is by design or simply by dumb luck, and all bets are off on what it might mean for his reelection bid, but as far as governance goes, Trump’s war with the news media is one that he almost can’t lose.

— —
John Ziegler hosts a weekly podcast focusing on news media issues and is a documentary filmmaker. You can follow him on Twitter at @ZigManFreud or email him at johnz@mediaite.com.
— —