Why Hillary Clinton’s Wet Kiss To Wall Street Is Scandalous 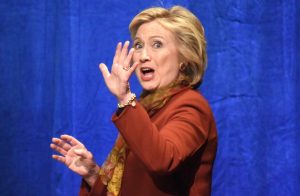 While cable news, print, and digital rightly pounced on Donald Trump over his crass and vile comments about women—and forcing himself upon them—devastating-in-any-other-campaign leaks of Hillary Clinton‘s behind-closed-doors speeches to big banks received a whole lot of crickets.

Example A: on CNN’s “State of The Union” Sunday morning, Jake Tapper decided to ask VP nominee Tim Kaine several questions about Trump’s conduct, saving one softball question for the end of the interview on Clinton’s speeches.

Predictably, Kaine dodged with the usual Democratic talking point that Russia is behind the leaks, and as a result, the content is besides the point. In this case, Tapper also allowed Kaine to suggest the latest WikiLeaks might not even be authentic, even though WikiLeaks has a 100% accuracy record over 10 years.

MSNBC, The New York Times, Associated Press, Washington Post have all followed suit with the kid-gloves treatment of Clinton’s wet kiss to Wall Street—so your humble correspondent will do the heavy lifting for the folks who should be.

In one of the most telling speeches, Clinton said you need to have a “public and private position” in politics since “people get a little nervous” if they see the “back room” sausage making that goes on.

TRANSLATED: don’t focus on what I say in speeches or in the next few years on the campaign trail; my words are simply for public consumption and electoral strategy; what I’ll actually try and deliver is an entirely different matter.

In another element of that excerpt glossed over by the media, Clinton turns back the clock to credit one of her “favorite predecessors,” Secretary of State William Seward, who helped Lincoln pass the 13th amendment when he “called some of his lobbyist friends who knew how to make a deal.”

TRANSLATED: bankers and lobbyists are welcome when I’m the one doing the sausage-making in the Oval Office.

Speaking with Goldman Sachs, Clinton’s empathy for Wall Street was on full display, bemoaning the “misunderstanding” and “politicizing” that’s taken place regarding the bankers role in sparking the 2008 economic crash.

I think that there’s a lot that could have been avoided in terms of both misunderstanding and really politicizing what happened with greater transparency, with greater openness on all sides, you know, what happened, how did it happen, how do we prevent it from happening?

TRANSLATED: It’s easy to blame you guys for taking risks and getting a little creative with other people’s money; but overall, the economy and “free market” can’t run without your brilliance and foresight, so people are just missing the big picture.

“There’s more that can and should be done that really has to come from the industry itself, and how we can strengthen our economy, create more jobs at a time where that’s increasingly challenging, to get back to Teddy Roosevelt’s square deal. And I really believe that our country and all of you are up to that job.”

TRANSLATED: Don’t worry about me dropping the hammer on you; in the end, you guys just keep writing the checks—I’ll take care of the rest.

In one of the more damaging things Clinton said in terms of the electoral map (i.e. Rust Belt states), the on-again-off-again free trade lover said we have to “resist” protectionism and embrace her “dream” of a “hemispheric common market, with open trade and open borders.”

TRANSLATED: sure, working people lose their jobs here or there when we write trade deals that enrich bankers like you, but in the big picture, is there anything better than driving down the costs of production and goods?

There’s plenty of more damaging excerpts leaked in Clinton’s speeches——you can watch my take on them at TYT Politics.

Unfortunately, millions of Americans tuning into tonight’s second presidential debate will be hearing about them for the first time.

Because our media is more focused on taking down the Trump monster it created than offering some balanced coverage of the other, naturally-less-appalling-to-them scandal of a presidential candidate being exposed as fraudulent.

Or, in Mitt Romney vernacular…a walking “Etch a Sketch.”
— —