Why History Channel’s Getting Duped on Amelia Earhart Matters 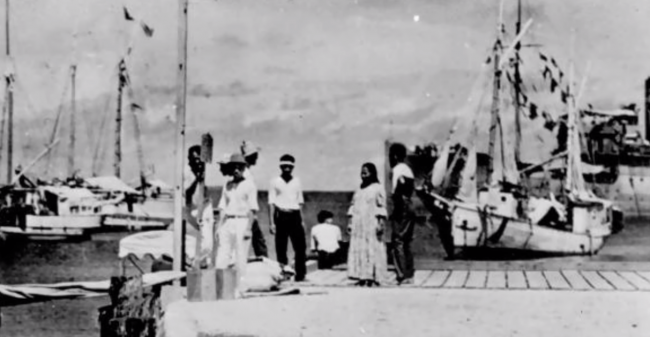 Lost amidst the chaos of the latest Trump/Russia revelations, has been one of the most extraordinary tales of epic media failure in recent times. This one was a REAL “Fake News!” story.

Just a week ago today, the news media, especially their partners at NBC News, were are all in a tizzy over a History Channel “documentary” which claimed to have solved the mystery surrounding the eighty-year-old disappearance of famed aviator Amelia Earhart. The “bombshell” evidence on which the entire show rested was a “newly” discovered photo of “Earhart” supposedly watching her plane be brought to the port of a small Japanese island.

When I first saw the photo, I agreed that it was interesting. Seeing a white man who looked a lot like her navigator, a white person who could be Earhart, and a form which could be the right-sized airplane all in a place where they theoretically could have crashed landed, seemed like too much of a coincidence to be totally unrelated, though the picture itself doesn’t have the feel of one where something significant is happening.

Plus, I thought, would the History Channel really put enormous resources, advertising, and credibility on the line if they hadn’t fully vetted the photo? Would NBC News and the Today Show got out of their way to take some credit for the show and do their very best to fuel its hype machine if there wasn’t at least something real here?

Keep in mind that I am the ultimate media skeptic. I know first-hand that just because the majority of the news media says something is true doesn’t remotely make that so (in fact, their herd mentality can very often cause major stories to be blown entirely). And yet, even I, at least at first, thought, there’s just no way this is total bullcrap.

But then I began to think about it some more and I used one of the strategies I always do to test out theories. I mapped out what it would mean if the photo was real and that therefore Earhart had been captured by the Japanese just before World War II. It immediately became obvious that, especially by now, there would be FAR more evidence to support this theory than just a random photo with no caption indicating it contained a world-famous person in the midst of an historic event.

After all, the Japanese would never have killed Earhart without at least letting the world know they had her, because her use as a propaganda tool would have been immense. She was only 39 at the time and should have easily lived for quite a while. Lots of people would have seen her. This was not a secret that could have been kept, especially after the war was over.

Still, I watched the program with an open, though cynical, mind. About five minutes into it, my experience as a guy who has made three major documentary films immediately told me that the production style was NOT consistent with a journalistic enterprise. This was far more like one of those “Is Hitler Still Alive?” docu-fictions that the History Channel has devolved into during recent years. I half expected Bigfoot to make a cameo appearance at any moment.

As for the photo, the more I learned the more convinced I became that it was irrelevant to Earhart’s disappearance. The program completely ignored significant problems with her hair and clothes and transposed an old photo of the navigator so it would more closely match his hairline.

But the biggest problem with the photo was the date it was taken. It was found by an old researcher, who admits to being “obsessed” with the Earhart case, in a file in the National Archives marked 1940. This obviously is a MAJOR problem given that the crash happened in 1937, but the show simply takes his word, which was obviously greatly influenced by “confirmation bias” that the file was inexplicably mislabeled. This is the equivalent of relying solely on Sean Hannity to interpret Donald Trump Jr.’s emails, and was a fatal flaw for the show.

While there were serious questions raised about the date of the photo before the show aired, it wasn’t until afterwards when it was completely debunked in a fashion which was humiliating for the entire media industrial complex and should (but won’t be) a cautionary tale for the media industry as a whole. It turns out the photo had been previously published in a Japanese travel guide in 1935, two years BEFORE Earhart disappeared!

So, after the History Channel spent years of research, tons of man hours, and millions of dollars on this show, it’s entire foundation was completely shattered by a Japanese blogger in what he said about thirty minutes worth of basic online sleuthing. The History Channel was immediately forced to announce they will conduct an investigation into what went wrong, though this astounding development has not gotten nearly the media attention that the original bogus report did.

I can save the History Channel some time and effort. What happened was that everyone working on the show knew what conclusion they were supposed to come to from the start and then saw everything through that prism, all while ignoring any signs that they might be on the totally wrong track (after all, that might mean the show never airs). This type of thing happens FAR more, especially in this era of cost cutting, than anyone in the news media is ever willing to publicly admit.

I have seen this phenomenon up close myself. Today is the fifth anniversary of the release of the “Freeh Report” which concluded that Penn State had actively covered up the crimes of Jerry Sandusky. The media immediately and universally cheered those findings and never gave them any critical analysis. Having spent these five years researching every aspect of the case far more deeply than anyone alive, I can assure you that I am 100% positive, very much against my own self-interest, that nearly everything the media told you about the case is false.

The media fell in love with a narrative, much like the History Channel producers did, which makes no sense and for which there is no legitimate evidence. Unfortunately, in the Penn State case the media is so completely invested in their mythology that not even a Japanese blogger could prove to them they blew it. Consequently, innocent men have been convicted and sentenced to jail.

Thankfully, in the Earhart case the only real damage done was to the credibility of the History Channel and NBC.