Why Is Facebook Promoting Bogus Stories in Its Related Links? 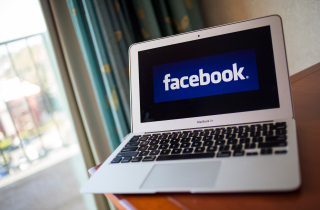 It’s well established that Facebook is where we go to find phony news stories and misleading clickbait, but you may have noticed in recent months that it’s not just our less discerning friends who are doing the irresponsible sharing anymore, it’s Facebook itself.

The Boston Globe today has a piece on the “related” stories that appear beneath links that are shared on Facebook, such as a recent Associated Press story. Bundled together with the factual piece about a young girl giving her father’s resume to Michelle Obama, for example, might be stories from dubious sources about how “Barack has lost all control of Michelle”, or one about the secret service stumbling upon the president and first lady having sex in the oval office.

A Facebook spokeswoman explained to the Globe that the related links are populated by an algorithm that uses word association and popularity of links from around the web, and that the company does not verify any of the content that is shared. With Facebook having become such a dominant force in the way we consume news, it’s a serious problem that they’re using their own considerable megaphone to spread disinformation.

It certainly behooves us to maintain our own sense of skepticism and vigilance when it comes to the content we consume online, but there’s a difference between seeing a suspicious link shared by your average friend, who, to be generous, is probably an idiot, and one that seems to arrive with the imprimatur of a (mostly) trustworthy media company like Facebook.

In a pretty perfect bit of irony, the link to the Globe‘s story about this practice I saw just now in my news feed includes three related links, one to the Washington Post, and two to a site called The US Patriot. One is the story about the president “losing control” of his wife, and the other is titled “Michelle Obama Claims Her Life Is More Difficult Than A Soldier’s.” I bet she did! 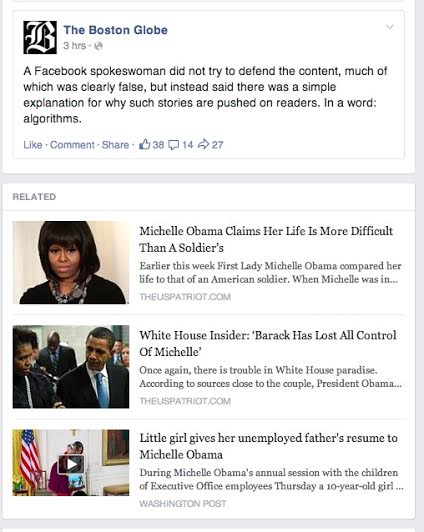 One out of three ain’t bad, right? Actually, that might make things worse. Packaging a malicious site together with the Washington Post further confounds matters, leading the reader to believe it may be similarly trustworthy.

A glance at The US Patriot shows that it’s the type of site that seems designed to generate delirious outrage clicks, and is populated almost entirely with the type of “related story” links that the Verge recently referred to as “weaponized clickbait.” You’ll have noticed the type of thing they’re talking about on many of the most popular websites on the internet, including this one. This type of clickbait usually appears at the bottom of a post in a series of image-driven boxes, often times featuring a scantily clad woman or someone who can’t believe how much weight they just lost.

This is essentially what Facebook has begun doing with their related story links.

As ‘Around the Web’-style widgets “have become ubiquitous, their style has been widely imitated, so that the average reader has no idea what they might find when they follow a link,” The Verge writes. “Clicking on that beautiful woman might lead you to an interesting story, to a thinly disguised advertisement, or to an infinitely scrolling landing page filled with weaponized clickbait, designed to get you to open as many tabs as possible.”

While the standards for what these types of suggestion engines lead readers to varies from site to site, the amount of money they generate has led to an explosion of less savory sites elbowing their way into the market. That means in order to stand out they have to post more sensational stories with more tabloid-style, attention-grabbing claims and images; all of which further devalues our ability to trust anything anyone recommends to us anymore.

I would say this is a serious cause for alarm, but I just noticed a link below this post to “20 Most Sizzlin Celebrity Female Bodies,” and now I forget what the point of my argument was going to be.