Why is Public Funding for Abortion so Controversial?
Opinion

Why is Public Funding for Abortion So Controversial? 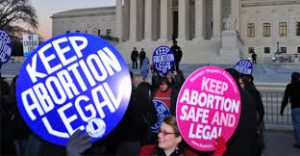 On Sunday, the Boston Globe reported that Massachusetts, one of 17 states where abortions are taxpayer-funded, could soon be making some unfortunate changes:

“Anti-abortion activists are … launching a petition drive to change the state Constitution, which — the state’s high court ruled in 1981 — grants women on Medicaid the right to a state-funded abortion.

If their effort proves to be successful, it would return a thorny political debate long silenced by the judiciary to the legislative arena, where activists could then try to pressure their representatives to cut off public funding.”

And yet, predictably enough, there is no outrage, no vocal opposition. Seven out of 10 Americans may support legal abortion, but it’s no secret that publicly funded abortion, for the most part, remains mired in utterly unnecessary controversy.

To that end, I think a refresher on some of the more outrageous things taxpayer dollars go to while conservatives and, in fact, many centrist Americans, complain about tuition-free public education and single-payer healthcare among other investments, is important.

President Donald Trump‘s weekend trips to golf at Mar-a-Lago reportedly cost about $3 million per trip; Melania Trump‘s decision to live in New York away from her husband cost taxpayers an estimated $150,000 per day. The witch hunt-like, partisan Benghazi hearings cost taxpayers millions, just like nearly every other investigation into the conduct of Planned Parenthood, because apparently donating aborted fetuses so medical researchers can work toward crucial cures is tantamount to “selling baby parts.”

Additionally, police officers put on paid leave after brutalizing, assaulting, and executing people of color in the streets also have taxpayers to thank for said paid leave, and, of course, the costs of the taxpayer-funded Iraq War could have paid for four years of tuition at a public college for every single one of the nation’s 21 million college students.

Arguably the most notable item on this cringe-worthy list is the Iraq War, widely supported by Republicans and abortion opponents, which resulted in hundreds of thousands of born, living humans being slaughtered and brutalized.

And yet abortion continues to be denied federal funding because some Americans, ignoring all credible research about fetal viability and pregnancy, continue to view fertilized eggs, embryos and fetuses as the same as born living babies. Because some Americans have interpreted a religious text that says nothing about abortion to mean a woman’s human rights, safety, and autonomy over her body come second to protecting fetuses.

And so, to not offend the personal beliefs of some Americans, of Christians whose values and belief system are constantly placed on a pedestal above the rights and needs of all other Americans, low-income women are denied access to a procedure that could save their lives, as many are forced to resort to dangerous DIY methods without access to safe, legal abortion. Research has shown that barriers to safe, legal abortion, more often than preventing abortion from happening, just put women in further danger as they go on to have the procedure one way or another, regardless. Only access to contraception mitigates the need for abortion, and yet the people fighting access to abortion are the same ones fighting access to contraception.

Throughout history, stinted access to safe, legal abortion as a result of legislative and financial barriers alike have resulted in thousands of women being mauled or even killed in back-alley terminations. And today, thousands of living humans continue to die as a result of taxpayer-funded wars and racially charged killings by police happen on taxpayer dime — all while public funding for abortion remains both illegal and unpopular, and all while low-income women across the country suffer the consequences of this.