Why Isn’t Donald Trump Campaigning for Gary Johnson to Make the Debates? 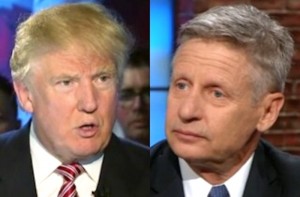 I have been saying here for over a year that Donald Trump cannot beat Hillary Clinton in a general election without some sort of catastrophic, game-changing event. While the two circumstances I had in mind (though not “rooting” for) were a major home-grown terrorist attack or an economic collapse, there are a few others which might alter the trajectory of the race. One of them, and perhaps the most realistic, is if Libertarian candidate Gary Johnson somehow makes the debate cutoff.

At first glance, this would appear to be so counter-intuitive as to be an absurd assertion. Both Johnson and his running-mate Bill Weld are former Republican governors who would, at least on the surface, provide a perfect outlet for principled conservatives to ditch Trump and vote their consciences. Giving them the platform and credibility of massive debate audiences would, like loading extra weight on a horse who is already behind, seemingly end any real chance of Trump making a near-miraculous comeback.

There is certainly a chance that this conventional wisdom might, in fact, on this rare occasion, actually be accurate. However, when the deck of cards is clearly stacked against you, as it currently is against Trump, there is really nothing to lose by replacing that deck. If Johnson somehow gained entry into the debates, I believe that there is a logical scenario where the new cards could very much work in Trump’s favor and put the outcome of the race in real doubt.

The primary reason that I have been very confident that Trump can’t win this race is that there has been no evidence that he can achieve a percentage of the national vote which is at least equal to Hillary’s likely “floor” of support. It is very difficult to currently conceive of Hillary getting less than 46% of the votes cast in a general election, while that is a number which appears to be beyond Trump’s reach because about 55% of the electorate says, in one form or another, that they would never vote for him.

This means that, unless Hillary suffers a massive and unprecedented lack of voter turnout (something the news media will not allow to occur, especially with Trump as the alternative), she is virtually a lock to win in the Electoral College.

Consequently, the only realistic way for Trump to win is to somehow reduce Hillary’s overall percentage of the vote to a level that he can reach. Obviously, the easiest way for this to happen would be for a far-left candidate to get traction and rob her of a significant part of her base. But Bernie Sanders decided not to go that route and Jill Stein is way too far down in the polls for that to ever occur at this point.

However, one of the more interesting phenomena of the polling in this race is that it appears when Johnson alone is added into the mix, Hillary’s lead over Trump actually shrinks slightly. This seems to be because Johnson’s “base” is made up of younger people who, without him to choose from, are far more likely to support Hillary than Trump.

There are also substantive reasons for this which could further exacerbate the problems Johnson could cause for Hillary should he be seen as a legitimate candidate by making the debate stage. Johnson is famously “pro-weed,” supportive of “Black Lives Matter,” generally favors open-borders, and believes man-made Global Warming is a real and serious problem (all of which may lose him my vote and leave me to write in Condi Rice).

Should Johnson make the debate stage, he could easily become a softer version of Bernie Sanders (with whom Johnson has said he agrees on most issues), coopting much of that movement and greatly lowering Hillary floor of national support. Let’s say that Johnson’s level of backing made it to the 20% range (he needs 15% to even be accepted into the debates, which seems currently very doubtful given current standing of about 10%) after the debates.

Given the understandable antipathy towards both candidates, this would hardly be a stretch. Simple mathematics would dictate that Hillary’s “floor” would then be reduced to, at best, 40%. It is also my belief that, after seeing Johnson up close, his level of conservative support would likely go down, while his number of Sanders supporters would go dramatically up. At the very least, this would require Hillary to further pander to the Sanders voters to keep them in the fold (“not only free college for all, but everyone also gets straight A’s, plus pizza parties on Fridays!”).

If Hillary’s “base” support shriveled into the 40% or even lower range, then Trump would suddenly have a great chance to pull this off. Seeing her even more vulnerable than she already is might even convince some “Never Trump” Republicans to hold their nose and vote for him anyway, potentially giving him a very real shot at victory.

Having Johnson in the debates would also help Trump in another very important way. With the ninety minutes split between three candidates instead of two, it would very likely save Trump from near certain embarrassment. This would make it far more difficult to nail him down and much easier for him to vamp his way out of questions on which he has no knowledge. I also think having the super naïve Johnson as a foil might actually play into Trump’s narrative that it is time for a non-politician to take over, while also allowing even the “softer” version of his immigration plan (whatever the hell it is on that given day) to look strong in comparison.

If I were Trump, I would be openly campaigning for Johnson to be added into the mix. Being a populist, Trump could even use the argument that polls indicate that a large majority of voters believe he should be included. I might even argue that the issue is so important that I won’t participate in the debates without Johnson being there. This would create both enormous pressure from the news media (fearful of losing these huge ratings events) to add Johnson, as well as a great excuse for Trump to bail on these debates which, on paper, seem sure to further expose him as the fraud that he is.

All of this seems so obvious that I’m amazed that there is no sign that it will actually happen. Of course, there is also very little indication that Trump knows what he is doing, or really wants to win.