Why President Obama Had To Show Photo I.D. While Voting Early

Why President Obama Had To Show Photo I.D. While Voting Early 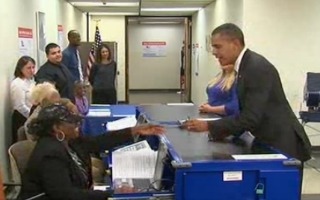 It has been reported far and wide that President Obama was asked to show a photo I.D. when he became the first U.S. president to vote early, sometimes without comment, but sometimes with the insinuation that this is somehow inconsistent with the administration’s opposition to the onerous voter I.D. laws which the Justice Department has opposed, and which have been smacked down by courts across the country. This deliberate confusion is common among the enemies of democracy who support attempts to disenfranchise voters who aren’t them, but the President did miss an opportunity to explain some important distinctions during that historic photo op.

Conservative disinformation on voter I.D. relies heavily on conflating things that don’t really relate, like your right to vote and the non-constitutionally-guaranteed purchase of liquor or boarding of airplanes. In this case, the photo I.D. that the President was asked for is not required of most Illinois voters. Photo I.D. is only required of Illinois voters who are voting early in person. First-time voters who registered by mail and any voter facing a challenge by a majority of election judges must also provide identification, but it doesn’t have to be a photo I.D.:

A voter needs two forms of ID, at least one of which must show the address of the registration. These may include:

Note: During Early Voting, voters must provide a current and valid government-issued PHOTO ID, such as a current Illinois driver’s license, current state identification card issued by the Illinois Secretary of State or a current passport. This is an Early Voting requirement under Illinois law.

The Illinois requirement of a photo I.D. only for early voting doesn’t violate this resolution, since it doesn’t apply to voters on Election Day, so there is no inconsistency. However, Hot Air‘s Allahpundit very reasonably asks for the rationale behind this extra step for early voters:

Fun fact: Illinois law doesn’t require voter ID on election day. Only early voters (plus a few others) are legally required to show it. It’s not immediately obvious to me why that is. If you’re going to go so far as to impersonate someone to cast their ballot, you can do it almost as easily on election day as you can weeks in advance provided you’re not stupid enough to try to commit fraud at the same polling place where you intend to cast your own ballot. The theory here, I guess, is that you don’t want to leave a would-be impersonator free to mess with the process for weeks on end. Better to demand ID for early voting and force him to confine his messing with the process to election day itself.

The real answer makes a little more sense, but does point up an inconsistency in the Illinois law. When the state first passed early voting, in August of 2005, the law set forth the photo I.D. requirement because it also did not require election officials to “verify the signature of the early voter by comparison with the signature on the official registration card.”

That seems like a fair trade-off, but the law was subsequently amended, in July of 2006, to require such a signature verification, while retaining the photo I.D. requirement. Since they’re now verifying the signatures, there really is no reason to require photo I.D., or anything beyond what is required of Election Day voters. The general idea behind fair, yet secure, elections ought to be that every voter’s identity and signature are reasonably verified before the first time they vote, and that their signature is verified thereafter. Any attempt to restrict voting beyond that should be met with vigorous opposition, and be required to meet a heavy burden of neccesity.

This is all probably too much for President Obama to have explained while casting his ballot, but it would have been good if he had used that spotlight to let voters know that, not only can they vote early, but that they should check their own state’s I.D. requirements.