Wife And Mother Of Sarah Palin’s Alleged Stalkers Speaks Out 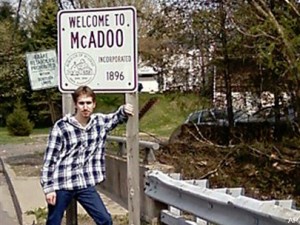 The wife and mother, respectively, of the father and son duo accused of stalking Sarah Palin is speaking out about her relatives, and the portrait she paints of her 19-year-old son (pictured) is one that would make any mother envious: He’s gifted. He’s sweet. He’s good with animals. He’s helpful. He can jump over buildings in a single bound. He can bake cookies using only his mind, etc. It’s a picture that is extremely at odds with the image one might form of a young man who admitted that he threatened to rape the former Governor of Alaska and who — along with his father — is accused of sending a series of creepy and threatening phone calls and text messages to Palin and those close to her.

The Daily Beast’s Diane Herbst provides a fascinating (and/or confusing and/or infuriating and/or incredibly sad) interview with Karen Christy, the wife of Craig Christy and mother to Shawn Christy. According to Ms. Christy, the root of this fiasco is none other than Willow Palin, Sarah Palin’s second eldest daughter, who made headlines of her own for writing a slur-laden Facebook rant.

Here’s what we know so far:

And here is what Karen told the Daily Beast:

Earlier this summer, Craig and Shawn asked an Alaska court to drop the restraining orders against them… and attempted to obtain the address of Palin’s part-time home in Arizona.

Both Craig and Shawn, who live in Pennsylvania, will be transported to Alaska to face further proceedings.