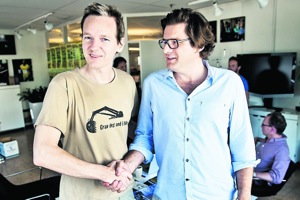 Wikileaks entity Julian Assange now officially fits the Swedish legal definition of “journalist.” The controversial former hacker and anti-military activist has been hired by the left-wing Swedish tabloid Aftonbladet to contribute bimonthly columns on politics and freedom of expression, and promises “the occasional scoop.”

In it’s history, Aftonbladet has waged war on director Ingmar Bergman and has in the past gotten the entire nation of Sweden in diplomatic trouble. While the paper notes that Assange’s decision to write for the paper may seem “strange,” it’s not all that far out there. Plus, this gives Assange the legal protections that come with being employed with an established newspaper, which in Sweden are particularly strong. “It is no coincidence that I chose to start writing in a Swedish newspaper,” he writes, “The Swedish publishing culture and the Swedish legislation has supported [Wikileaks] ever since we started.” He also noted that it “cannot be excluded” that he and Wikileaks would collaborate with the hard news section of the paper to publicize leaks.

According to Assange’s debut interview in the tabloid, Assange took the gig– and has collaborated with other mainstream media sources– because he “promises our sources maximum exposure of what they want out,” and noted that the paper’s and country’s culture was friendly to his political aspirations. As for the Aftonbladet leadership, the tabloid’s editor-in-chief, Jan Helin, wrote an enthusiastic blog entry on Saturday about the hire. “How he writes, I have absolutely no idea,” he admitted, “but he is certainly the most exciting brain in the world right now in terms of freedom of expression issues.” To get an idea, Helin could read the non-fiction account of the international hacker scene Underground (in which Assange has a prologue) or, um, this.

[Photo of Assange and Helin via Aftonbladet]