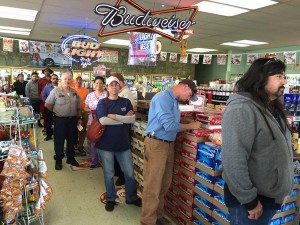 It’s Saturday in January. From the looks of it, the news cycle is relatively slow, particularly with El Chapo now behind bars (for the time being, anyway) and Ted Cruz’s father’s nephew’s cousin’s former roommate’s birth certificate now released, there doesn’t appear to be much preventing from the new Powerball jackpot of over $900 million from taking up major time in the news cycle more than any lottery drawing, like, ever.

Is this story deserving of the kind of coverage we’re seeing, with hourly reports on every local news and national cable news networks, complete with resources sent out to the field? Absolutely. It is historic, with the previous all-time highest Powerball jackpot being “just” $590.3 million three years ago. And from a personal perspective, Powerball was the second question asked to kick off multiple conversations at Happy Hour on Friday night (First question: “How was your holiday?” followed by “Did you get a Powerball ticket yet?”). On cue, the topic is currently trending on Twitter and Facebook, which is obviously a big factor in fueling ticket sales. So when looking for a primary reason behind the number soaring past $900 million, just remember … not too long ago, this kind of word of mouth via social media pretty much didn’t exist.

Amazingly, tonight’s drawing at 10:59 PM EST may not mark the end of the road, either. According to FiveThirtyEight.com, there’s about a 1-in-4 chance (23 percent) that no winning ticket will be produced despite an anticipated 428 million tickets sold, meaning this could plot could stretch on for another few days. Of course, that means more insufferable segments that include advice from “lottery experts” who educate us on how to increase our chances of winning (current odds: 1 in 292 million or so). Context: Here are a five things that are far more likely to happen to you in life than winning tonight:

– Having identical quadruplets: 1 in 13 million

So why sit on line and even make an effort with odds like that? The common sentiment is that someone has to win, and with the very low-risk, high-reward that comes with any lottery and all the dreams that go with winning it, the feeling is, “Why not me?” Still, one has to wonder where the motivation comes from to play Powerball or Mega Millions or your average Pick-Six lottery only during exceptional times like we’re seeing now. Because really, what exactly compels a person to not buy a ticket for the average Powerball jackpot (which is about $81 million) but does entice them enough to potentially stand on line outside in January when the jackpot gets to obscene levels like $900 million? Because at least check, $81 million can buy you more than enough yachts to water-ski behind, to quote the great Bud Fox.

Think about it: Let’s say a person earns an average of $50,000 per year and works for 50 years before retiring. Add it all up, and that still only nets $2.5 million before taxes. Even those earning an average of $100,000 year only get to $5 million net-earned over the course of five decades. So why not play Powerball twice a week instead of special times like today?

This is just a theory, but the answer appears to be two-fold: Massive media coverage (creating word of mouth) and conformity. Anyone sane doesn’t expect to win, but it makes for a good conversation piece with friends and neighbors around “strategy” and the perfunctory “Here’s what I’ll do if I win” scenario. And when the media (social, local, national, whatever) gives the story big-time attention, it serves as a reminder to go out and buy when other more traditional drawings do not.

“I think of lotteries as a tax on the mathematically challenged,” said the author Roger Jones. Despite the almost-impossible odds, tickets are reportedly being sold so fast today the jackpot may hit $1 billion by the time the winning numbers are announced.