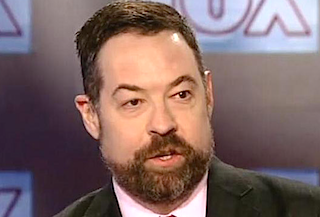 It was just last June that Wall Street Journal columnist James Taranto declared there is a “war on men.” At the time, he was writing about the “campaign against sexual assault in the military” that in his mind had turned into an effort to “criminalize male sexuality.” In a new column, Taranto has extended his war to college campuses.

As a jumping off point, Taranto uses an article by The New York Times’ Michael Winerip titled “Stepping Up to Stop Sexual Assault,” which focuses on “bystander intervention” programs as a way to prevent rape on college campuses. Taranto doesn’t actually oppose the program, but he does argue that it helps the supposed rapist as much as it does the victim.

Taranto’s real rhetorical gymnastics come when he takes Winerip’s analogy about drunk driving prevention in a disturbing direction. “The hope is that bystander programs will have the same impact on campus culture that the designated driver campaign has had in reducing drunken driving deaths,” Winerip writes in his piece, referring merely to the awareness of the issue that groups like Mothers Against Drunk Driving have had on the culture.

What is called the problem of “sexual assault” on campus is in large part a problem of reckless alcohol consumption, by men and women alike. (Based on our reporting, the same is true in the military, at least in the enlisted and company-grade officer ranks.)

Which points to a limitation of the drunk-driving analogy. If two drunk drivers are in a collision, one doesn’t determine fault on the basis of demographic details such as each driver’s sex. But when two drunken college students “collide,” the male one is almost always presumed to be at fault. His diminished capacity owing to alcohol is not a mitigating factor, but her diminished capacity is an aggravating factor for him.

Taranto’s twisting of the initial drunk-driving analogy also has its limits. There is a major difference between two cars unintentionally “colliding” and two college students engaging in behavior that may not be wanted by one of them. Whatever he thinks may happen in college dorms, drunk kids are not the same as speeding hunks of steel.

He also fails to properly acknowledge the fact that, statistically, a male college student is capable of physically overpowering his female counterpart. When, near the end of his piece, he does allude to that reality, it’s in the form of a quote from City Journal’s Heather Mac Donald, an occasional Fox News “expert” who has written about such issues as “the anti-profiling lobby’s harmful effects on black Americans.”

He singles out the quote below from Mac Donald, before adding, “That they do all this in the name of equality is downright Orwellian.”

“Ironically, campus feminists have themselves revived selective portions of an older sexual code: they embrace the Victorian conceit of delicate female vulnerability while leaving out the sexual modesty that once accompanied it.”

Does this mean, in Taranto’s mind, that in order for women to be treated with respect and taken seriously when it comes to rape they must be “sexually modest”? Because that doesn’t exactly sound like “equality” either.