xoJane Seriously Just Published ‘It Happened to Me: My Friend Joined ISIS’

xoJane Seriously Just Published ‘It Happened to Me: My Friend Joined ISIS’ 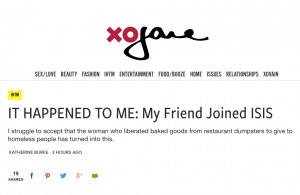 If you thought that the xoJane post from a woman who took pleasure in her friend’s death was something else, you are about to be blown away. The one thing that site knows how to do is constantly one-up itself. It never ends. From stories about cat hair in vaginas to first-person accounts of savagely beating up an accused rapist, xoJane will publish basically anything shocking.

What came today, though, was really shocking. Today, an essay came out titled, “It Happened to Me: My Friend Joined ISIS.” Just let that sit for a minute. It gets crazy.

The author, Katherine Burke, described how her friend Ariel Bradley was just a sweet girl living in a commune around Chattanooga, Tennessee, when she knew her in 2006. They fell out of contact for a bit and then, Burke says, she saw this BuzzFeed article on her Facebook timeline last summer. The article was all about Bradley, who had tweeted her support after a man opened fire on two military facilities in her hometown. She was living in Syria at the time and BuzzFeed’s reporters wanted to know how a kind, homeschooled girl from the Bible Belt wound up an extremist in the Middle East. Burke explains that article like this:

Buzzfeed found out about Ariel after she tweeted praise for an Islamic extremist who had committed a mass shooting at an army recruitment center. Her comments sent the internet into a rage, and when Buzzfeed looked into the engineer of all this chaos, they found out it was a white girl from Tennessee.

It’s how she explains her own feelings that is noteworthy here, however. The BuzzFeed piece serves a very different purpose than the xoJane piece; the BuzzFeed one is about Bradley and the xoJane one is about Burke. She wrote about the effect Bradley’s choices had on her:

At a party that July night, I got drunk and joked about the stupid girl I knew who ran off to ISIS. I was trying to believe that I did not have to feel bad about this one. Maybe when someone does something so enormously dim-witted, it’s no one’s fault — but of course that was bullshit … I still could not embrace the idea that the friend I had danced topless with in basements, the girl who ran our local community garden and who liberated baked goods from chain-restaurant dumpsters to give to homeless people had turned into this.

There are passages about Burke’s compassion for her friend — who grew up extremely poor and in a Christian household that was extremist in its own way — and her ever-present guilt for not trying to help her when it became obvious that she was being sucked in by extremism that are surprisingly deep for a series of articles that is known for being clicky and often heartless.

That the next suggested story is titled “I Lost My Friend Over Makeup Brushes” is sort of jarring while being totally expected. Read it all here.