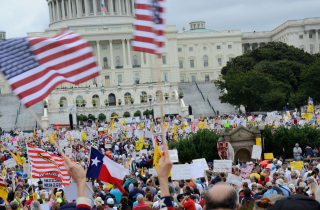 This is bound to surprise some people.

Using data from the National Science Foundation’s “Science Indicators,” the Cognitive Reflection Test, and a “nationally representative sample of U.S. adults recruited to participate in a study of vaccine risk perceptions,” Kahan developed a series of “science comprehension” scales to analyze a variety of groups.

Among his findings: “Scientific literacy correlates negatively with religiosity.” And “science comprehension decreases as political outlooks move in the rightward direction — i.e., the more ‘liberal’ and ‘Democrat,’ the more science comprehending.”

But when he analyzed the data for the 19% of respondents who self-identified as tea partiers, he was astonished to find that those people exhibited a slightly greater scientific comprehension than non-tea party members. In addition, Kahan noted, self-described “tea partiers” also scored higher scientific comprehension than “conservatives.” The histogram below demonstrates the former, via: 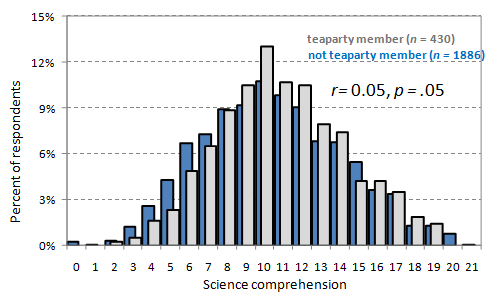 While noting that this relationship is “trivially small,” Kahan wrote: “I’ve got to confess. I found this result surprising. As I pushed the button to run the analysis on my computer, I fully expected I’d be shown a modest negative correlation between identifying with the Tea Party and science comprehension.”

“But then again,” he admitted, “I don’t know a single person who identifies with the Tea Party. All my impressions come from watching cable tv — & I don’t watch Fox News very often — and reading the “paper” (New York Times daily, plus a variety of politics-focused internet sites like Huffington Post & Politico).”

However, he added, “Next time I collect data, too, I won’t be surprised at all if the correlations between science comprehension and political ideology or identification with the Tea Party movement disappear or flip their signs.”