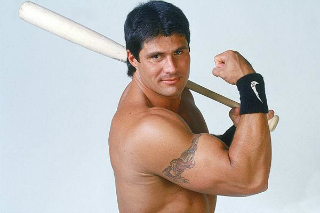 Just when you thought former baseball star and professional Twitter troll José Canseco couldn’t get any more outspoken about everything, he gets a weekly column called “José Can Say So.”

Taking to his inaugural VICE column, titled “Control The People, Not The Guns,” Canseco carefully (read: aggressively) articulates his a gun control policy that includes the ability to openly brandish a weapon in public — likening it to the nuclear arms strategy of “mutually assured destruction” — in addition to automatic execution for anyone who kills an innocent person using a firearm.

“I truly believe, aggressively, that we have the right to bear arms,” the slugger began. “We should be able to carry guns to protect ourselves. Period.”

He then advocated for less gun restrictions: “You should have the right to protect yourself and bear arms, no questions or ridiculous restrictions. Everyone should be able to carry a gun and show it in public: ‘Listen, you mess with me, you’re going to get shot.'” He continued on to echo the post-Aurora sentiment of many gun rights advocates: “I guarantee that if four or five or six people had guns on them in that theater, either that kid would never have gone in there, or he would have gotten blown away. That’s just the way it is. I think you have to send a message to the criminals: ‘No no no no no, you think you’ve got a gun? I’ve got a bigger gun. I’ve got two guns on you.’ It’s simple psychology, really.”

Canseco then revealed that when he was 19 years old, a younger teenager put a gun in his face. After explaining that he scared the kid away, he then went on a rant about a hypothetical situation where an unarmed robber breaks into his home. Would he shoot him if he discovers the person is unarmed? No. But, obviously, that’s a problem in the dark. So as a “6’4″ 250-pound martial arts expert,” Canseco surmised that he’d only use a gun if the robber had a gun, and then in that case, he’d only shoot the burglar “above the waist,” you know… “blast him in the leg or the knee.”

But for those who do misuse their firearm and kill innocent people, Canseco unequivocally believes “you should be executed.” And what would columnist Canseco do with alleged Aurora shooter James Holmes?

I would fry the Aurora shooter, big-time. I’d do it like old times; I’d make it a spectacle and try him in public. Hang him, electrocute him, whatever. Maybe make it a Pay-Per-View special and send the proceeds to the families of the victims and maybe offset some of the costs of keeping him on death row and operating whatever death machine you strap him to. If I were president, that’s exactly what I’d do. No doubt in my mind. Financially, it’s a great deal.”

Canseco then concluded that his ideal policy of free-range gun ownership is similar to an international nuclear weapons strategy. “Our country has nukes and other countries have nukes, and we don’t have these things because we want to or will use them, really. We have them to deter other countries from using them. On a large scale it works, so why not on a smaller scale? Mutually assured destruction.”