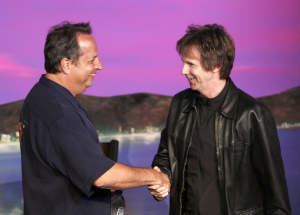 Comedians Jon Lovitz and Dana Carvey shared a moment commiserating the roadblocks in place when attempting make jokes about or at the expense of President Barack Obama.

Lovitz, who was filling in as host of Dennis Miller‘s radio show, asked Carvey what his thoughts were concerning that idea that certain groups — GLAAD being an example he gave — go after comics for their material by attempting to argue about what, exactly, constitutes as a “joke.” (Lovitz, of course, has a recent history of dealing with the public’s reaction to his thoughts about the President being a “fucking asshole.” The actor was even chastised by none other than Bill O’Reilly over having been “disrespectful” in his remarks.)

“Well, I think it’s scary and dangerous,” said Carvey. “I think free speech is probably the coolest thing we have in this country and, again, you can label it hate speech and dismiss it, and then you’re allowed to censor it.”

He added that, modern times being what they are, he tends to feel, psychologically, as if there’s always someone around recording the things one says and does, presumably for the purpose of scrutiny.

Later, Carvey said he realizes there was a certain level of “sensitivity,” as he described it, surrounding Barack Obama given that he is the country’s first black president, but that “over time it becomes kind of knee-jerk and patronizing not to satirize the President.”

Lovitz then asked Carvey what he thinks about the argument that SNL — their former stomping ground — doesn’t make fun of Obama, and, what’s more, will only make fun of Republican politicians. Carvey responded by saying that, in his own experience, he’s had success with Obama jokes (/impressions) when he’s been able to find a particularly funny angle to use as a platform, much like with his widely-known “not gonna do it… wouldn’t be prudent” George H.W. Bush catchphrase. But when SNL attempted to poke fun at Obama in New York, the joke “bombed.” He seemed to be saying that the problem was not the joke or its subject so much as the context and the audience present.

The two comedians agreed that it’s important and even essential to poke fun at authority figures and those in power, whomever that person or people happen to be.