A Prediction for How and Why Trump Will Lose 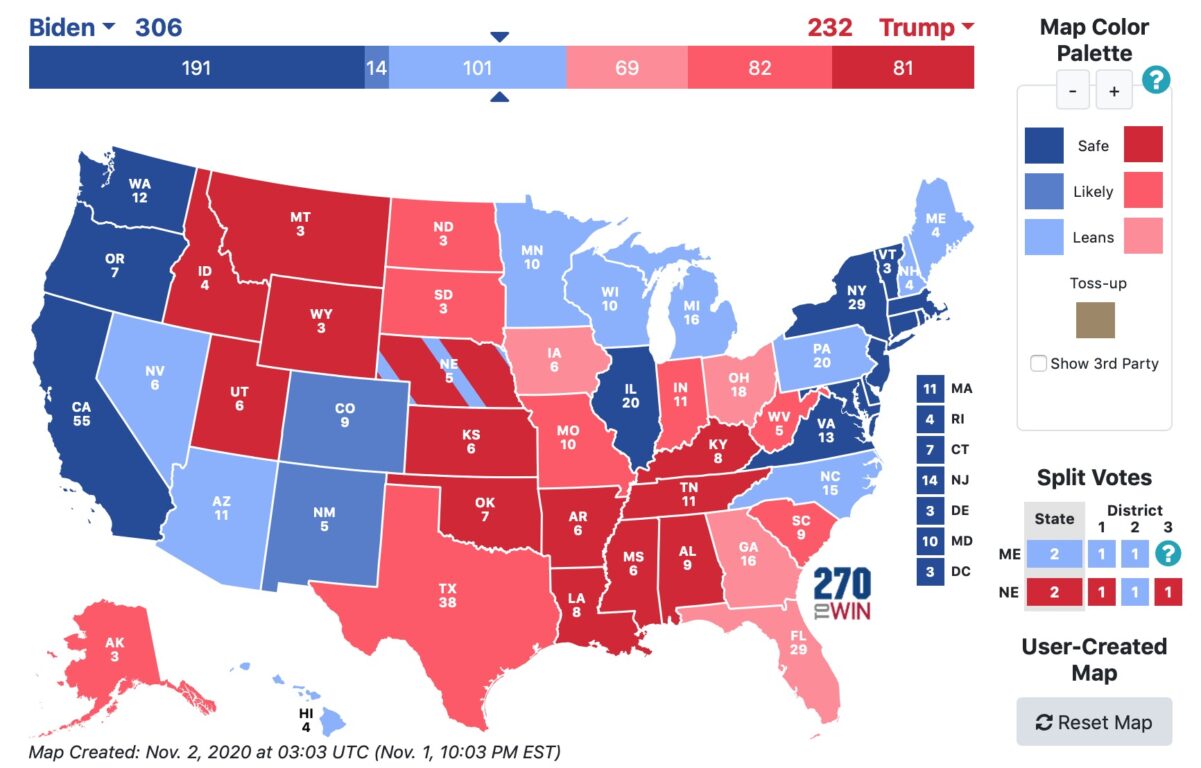 Since July, I have consistently predicted that President Donald Trump is not going to win reelection. This is not because it is clear he is going to get blown out, but because his path to the magic number of 270 Electoral College votes is simply too narrow to be able to navigate the unique circumstances of this election.

In others words, it could very well be rather close, but the chances of Trump navigating all the many obstacles in his way, without getting knocked out of the game, were very remote. Recent events, if they had had any impact, have done nothing to make this already daunting equation any easier for Trump to solve.

Thanks mostly to the pandemic, there are many very complex factors in this unprecedented election. However, in my view it is best to look at this situation with striking simplicity.

2020 is basically a redo of the 2016 race, only with a strong wind blowing in Trump’s face, rather than at his back. Joe Biden is less hated than Hillary Clinton, there is no James Comey factor, Democrats are not at all complacent, and the media coverage attacking Trump (in my view, unfairly) for his response to the coronavirus has been both ferocious and relentless.

Yes, Trump has the weapon of incumbency which was not at his disposal in 2016. But in his situation this may actually work against him because this time around there are no independent voters curious about whether Trump might miraculously rise to the gravity of his office after he was elected.

So, under this premise, it is fair to take the results from 2016, an election where Trump actually got far fewer votes than Clinton did, and extrapolate from that (along with some help from the Democratic victory in 2018 midterms) to get to what will likely happen in 2020.

In 2016, Trump pulled off a remarkable “inside-straight” of toss-up states in the Electoral College. To do so again would be like Trump navigating the precarious obstacle course on the reality television show “American Ninja Warrior.”

Think about this obstacle course, made up of the most important 11 “toss up” states, as having three tiers. Trump must circumnavigate all three in order to barely emerge victorious.

If Trump loses ANY of these four, three of which might be called fairly early on Tuesday, then the election is officially over. If he wins all four, then we are virtually assured of Trump being able to at least hold off from conceding for quite a while until all of the votes are counted, and maybe recounted.

My view is that Trump will win Texas and Ohio, but that Florida and Georgia could be dicey. It would not be shocking at all if Georgia goes for Biden and that this is the moment that Democrats start to celebrate. However, with a gun to my head, I think Trump probably barely gets through this section of the gauntlet.

Trump needs to win at least two of these, and probably all three (under the premise that if he cannot win Iowa then victory in any of the other “Big 10” states in “Tier Three” states is very unlikely). I believe he will barely lose both North Carolina (where Trump being portrayed as “anti-science” is a killer in the “Research Triangle,” which dominates the middle of the state) and Arizona, which would effectively, but not literally, end the election. North Carolina will likely provide the closest contest of any state, so it is doubtful this tier will be conclusively decided on Tuesday.

If Trump “passes” the first two tiers, then he needs to win either Pennsylvania or Michigan, or both Wisconsin and Minnesota (winning just one of those two might cause the dreaded 269-269 tie) in order to shock the world for a second consecutive time.

In my view, only Pennsylvania is truly “in play.” My home state, Pennsylvania also happens to be the focus of the only conversation I have ever had with Trump (it is a long story).

Despite his massive crowds there, and the surprise endorsement of a Pittsburgh newspaper, I just don’t see how Trump overcomes the loss of suburban moms there. Unless the turnout of black voters is far less than it was in 2016, or if Trump really has dramatically/mysteriously increased his support within that community, the polls will have accurately forecast is defeat.

It is indeed quite possible, especially because of the way they are counting, that Pennsylvania could end up as the 2020 equivalent to the “Florida 2000” nightmare.  But that is an unlikely scenario.

In the end, I see Biden winning the popular vote 51-46 (though it will appear a lot closer than that until all the votes are finally counted here in California). He will win the Electoral College by either a 306-232 margin (the exact opposite result of his 2016 win), with the “extra” vote coming from winning one of Nebraska’s congressional districts, or by 291-247 if Trump pulls out a nail-biter in North Carolina. For the record, I believe that Democrats will maintain their advantage in the House, and take control of the Senate by a 51-49 margin.

Under my projection, it could take quite a while to sort this all out, and it may even appear at times that Trump has a very legitimate shot at making it all the way to the finish line. But, even under that circumstance, he will eventually run out of gas in “tier three.”