Should Elizabeth Warren Bow Out of VP for Woman of Color?
Opinion

Biden Veepstakes: Should Elizabeth Warren Follow Klobuchar’s Lead and Step Aside in Favor of a Woman of Color? 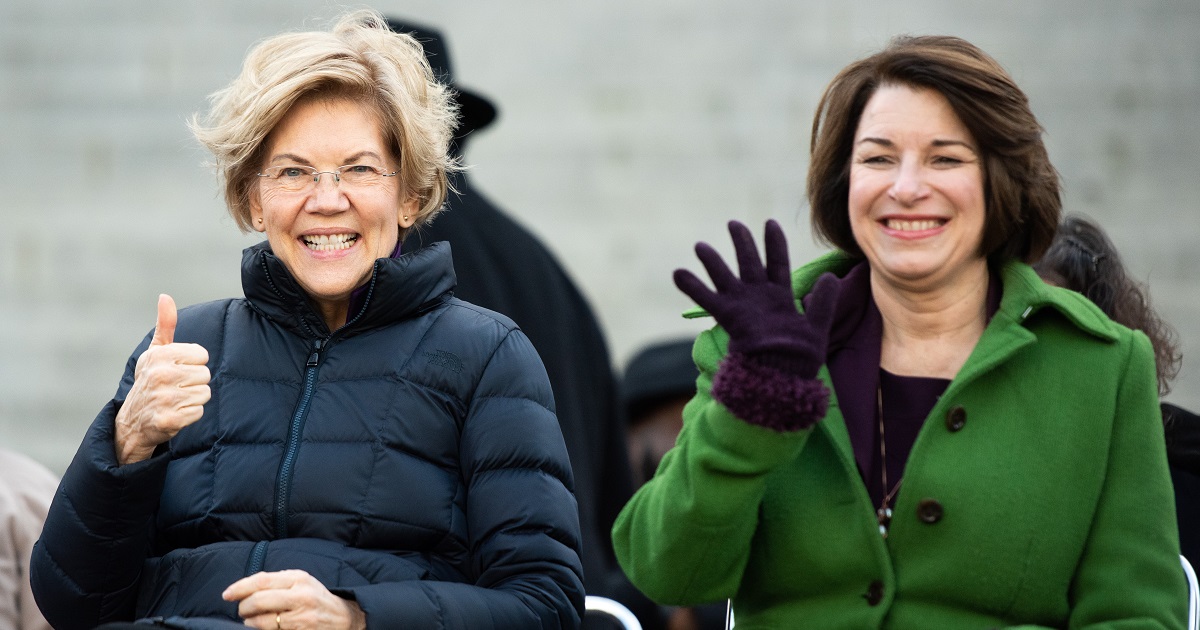 Sen. Amy Klobuchar’s withdrawal from consideration and endorsement of an unspecified woman of color as former Vice President Joe Biden’s running mate sparked a major uproar in the presidential race, and led many to wonder where that leaves Massachusetts Senator Elizabeth Warren.

On Thursday, Sen. Klobuchar announced she was withdrawing from consideration in what many saw as a direct broadside at Warren, who is the only white candidate left on Biden’s ever-shortening shortlist. Klobuchar told MSNBC host Lawrence O’Donnell “I truly believe, as I actually told the vice president last night when I called him, that I think this is a moment to put a woman of color on that ticket.”

On social media, there was a lot of triumphalism from opponents of Warren and angst from supporters, but my analysis is that all Klobuchar did was to grease the skids for what was going to happen anyway.

But Politico Mag editor Bill Scher posed an interesting and inevitable hypothetical upon hearing the news. After observing that Klobuchar’s announcement effectively “took Warren out,” he wrote “Next interview Warren does, she will be asked the question: will you step aside for a woman of color like Klobuchar did?”

“She will either have to say yes, or have a really good way of saying no,” Scher added.

Taking herself out (and Warren with her.) https://t.co/ikEiZBGjUe

Next interview Warren does, she will be asked the question: will you step aside for a woman of color like Klobuchar did?

She will either have to say yes, or have a really good way of saying no.

Scher also had some thoughts on how Warren could respond without dropping out.

*I wholeheartedly agree with Amy that a woman of color vice-president will do a great deal to bring our country together, but this is a decision for Joe Biden to make, I trust his judgement, and I will help him in any way that I can*

Like me, Scher has been bullish on Senator Kamala Harris as Biden’s running mate for quite some time, and not so high on Warren. But preference should be irrelevant to this issue. I happen to believe that Sen. Harris is the best choice both on the merits and on the politics, particularly on the politics of the moment. I also think that what Klobuchar did was more to give both Biden and Warren a political off-ramp to ease the disappointment of Warren supporters, who were becoming more voluble about something that clearly wasn’t going to happen.

Warren actually was asked a similar question to the one Scher poses now, albeit during what seems like a different era altogether now, and she answered in much the same way Scher now suggests.

During an April interview on MSNBC’s AM Joy, host Joy Reid asked Warren “Is it workable for the Biden and campaign to go in with an all-white ticket? Is that workable in 2020?”

“That is a decision that will be up to the vice president,” Warren said, then added “Here’s how I see this. I’m in this fight all the way no matter what. What I care about is that we have a country that is in the middle of a crisis right now, and I’m giving it everything I can just to try to be helpful.”

Warren followed up that comment with a lengthy response about fighting income inequality, and for policies like canceling student debt, as well as trying to solve the coronavirus pandemic.

Make what you will of that response — Warren supporters were likely thrilled to hear their priorities vocalized, but given that the question was about diversity on the ticket, it was a missed opportunity to speak to issues of specific concern to black voters.

Those issues are now front and center for the entire country, but they were always going to be central to Biden’s success with the base of the Democratic Party, and Warren was always destined to leave her mark on Biden’s campaign in ways other than being his running mate.

The change in circumstances does, however, change the context of the question. When Reid asked, it was an opportunity for Warren to make her case among a large field of hopefuls.

But when, not if, Warren is inevitably asked the question that Scher accurately predicts she will be asked, it will carry with it a fresh ugliness. The questioner will be pitting Warren against Klobuchar, and against whichever woman named Kamala eventually gets the nod. It will be a gross spectacle for all three of them in what should be a moment of historic pride: the selection of the first woman vice president.

I won’t presume to instruct Senator Warren on how to respond, or on how to proceed, but it would be supremely unfair to Warren and Klobuchar, and especially to the eventual nominee if Warren is seen as being pushed out of the running by other women — or generously bowing out of her own accord — rather than being judged on the merits.